I'm finally getting around to writing about this game nearly a week after the game has been over! This was one of the most interesting games I've been to in person and absolutely the best pitcher's duel hands down. This game started at 7:05pm and ended at 11:50 pm. Nearly 5 hours and I barely missed a pitch except for the home half of the 3rd when I left my seat to grab a bite to eat. Let's back up a bit to the pregame though.

I arrived at The Diamond at about 5:30 in hopes of collecting some 'graphs of the Orioles farmhands. I'd say it was a successful outing in that regard. I ended up with 6 of my "Top Prospect" cards, and 5 regular cards signed. Among the regular cards I got signed was this card of Dan Klein. I asked him if he had ever seen one and he said it was the second. He really studied the card hard and pointed out to me that they (Topps) must have airbrushed the Orioles onto his jersey because he only used an Easton Glove in college. I told him Topps is famous for airbrushing cards. 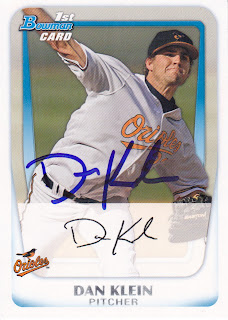 Nick Bierbrodt was a spring training invite pick up for the Orioles this year. I remember him when he pitched with the Diamondbacks a while back among other teams. He asked me if he really wanted me to sign this card because "I think I'm past the Top Prospect part of my career". I insisted and he signed it anyway! He would go onto play a large role much later in the game. His veteran arm pitched 4 scoreless extra innings in relief and showed the youngins how it was done! Hats off to you, sir! 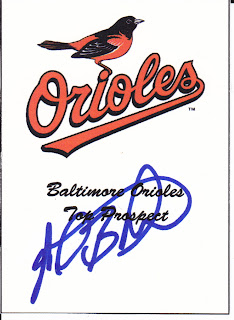 So the game started and with Richmond scoring in the first inning and Bowie fighting back for 1 run in the third. The score remained tied until the 10th inning when Bowie Outfielder Xavier Avery got a BROKEN BAT single deep into the 5-6 hole and later came around to score. All Bowie needed was to get 3 outs and the game was over.... Not this night!
After some shoddy defense, Richmond scored a single run in the bottom of the inning and the marathon game was on.
Now I capitalized the BROKEN BAT for a reason. I seemingly was the only Orioles fan in the stands near the Baysox dugout and pitcher Eddie Gamboa gave me a nod and thumbs up pointing to my hat. So after Avery broke the bat, Gamboa was playing around with it in the dugout and talking with his teammates. In the bottom of the 15th he looks at me (the only person within 30 feet of me) and gives me a look like "You're still here? You must really be a fan!" I put my hands together like I was holding the bat and he motions for me to come and get it!!! BADASS! Here's the Picture of it: 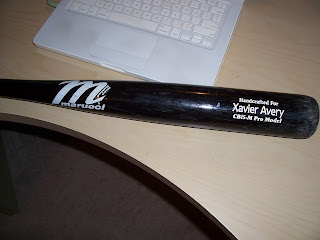 Though it's cracked on the handle and isn't good for anything but kindling. BUT I HAVE A GAME-USED BAT!!!

Anyways, back to the game, the Baysox were able to push across one run on a walk, sac bunt, and a double by Ronnie Welty (his only hit of the game). Richmond went quietly in the bottom of the 16th.

The Fireworks after the game was almost postponed because of a city ordinance that wouldn't allow them after 12 midnight. Luckily for the few hundred fans that stayed, the fireworks were really nice. It kinda got me in the summer mood. Then I realized that I needed to be on my way to work in 5 hours!

It was a long night considering the night before I had watched the Orioles on TV go 14 innings and end just after midnight. In two days I had watched 30 innings of ball but it was all worth it!

So I'll leave you with a question, What was the longest game you have been involved in or watched in person?
Posted by Ryan H at 6:44 PM