Since I am a big Bowman Collector, I pre-ordered a Jumbo box of the 2011 iteration way back in January. I always enjoy reading the backs of the prospect cards and gleaning out which are are the true Major League quality prospects and the set filler guys. Probably my favorite section on the back is the "Up Close" section. There are always interesting tidbits of information on the player that any self respecting Jeopardy fan would love (I'm addicted to the show!).
I know a lot of collectors that arent' huge fans of Bowman for various reasons (crazy-ass numbering system, prospects that never pan out, etc...) but I look forward to it year after year. I'm not a "Rookie Card Investor" by any means but I do like to see the next wave of players on the way to the show. So, here's the goods from my box:
I got loads of base cards, prospects, golds and Chrome prospect cards. It's a good start on the set. Nobody wants to see anymore of these so I'll spare you. But if you have needs, let me know and I'm sure we can trade.
Chrome Prospect Refractors seem to be a little more rare this year. I got two: Chris Dennis, Brandon Guyer. Guyer already made the majors this year and jacked a homer in his first At-Bat. 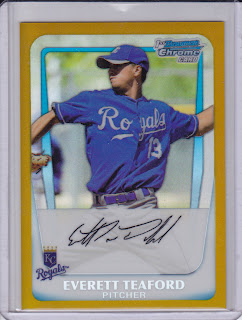 Gold Refractor: Everett Teaford 17/50. I did get some color in this box (more farther down) so that's exciting I guess. I don't know if Teaford is a hot prospect for the Royals or not. They have so many nice young players down on the farm to keep track of.
The box also produced the promised amounts of regular parallels too. I got one Orange Border; Adam Dunn and three blue borders; Josh Hamilton, Michael Spina and JA Happ. No Orioles but I'll take'em for trade bait. I also got one International Parallel of Jack Shuck. I'm happy to see these back after a 10+ year lay-off. I wish they were one per pack though in place of the gold bordered parallels
I feel that this year there are a couple too many inserts. I like the Topps 100 Prospects, Bowman's Best and Finest Futures but I think I could go with out the others. I don't even remember the names they are so forgettable. The one notable Bowman's Best card I got was Bryce Harper. Again, everyone has seen this card before. It is interesting to note that this was my only Harper I got out of the entire Jumbo box though. I'm a little disappointed. 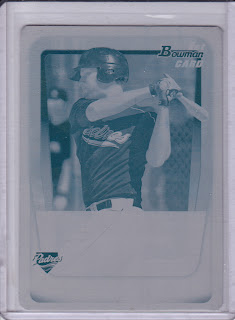 Printing Plate: Bowman Prospects Nate Freiman. Well what can I say about Printing plates... I just don't see the point in Topps putting them in products. Yeah they are one of a kind but I don't even consider them "Hits". They are worthless pieces of junk to me. 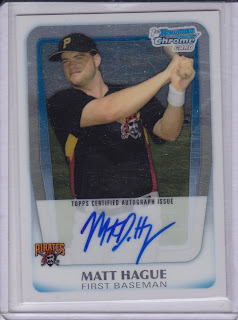 Bowman Chrome Prospect Autograph Matt Hague. According to the back of the card, Matt is not a bad Prospect. We'll see how he turns out in a few years. First Base Prospects haven't panned out well for Pittsburgh recently. Rico Washington, Brad Eldred, Walter Jones or Steve Pearce ring any bells? 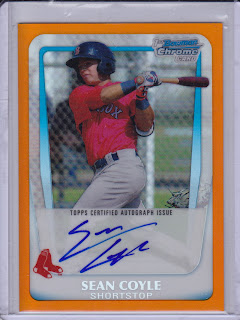 Orange Refractor Autograph Sean Coyle 2/25. This is a pretty rare card I believe. Leave it to me to pull a BIG MOJO HIT of an AL East rival of the Orioles. It's either dumb luck on my part or that Topps is swayed towards the Red Sox and Yankees that I keep pulling these cards. I haven't decided whether or not to hang on to this card or not. 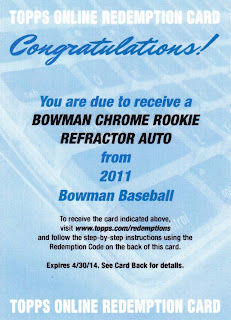 Here is my third promised autograph card of the box. I don't get really upset with pulling redemption cards. I understand their place in the hobby. I know that the players have lives and don't have all day to sit around autographing cards all day long and that Topps has printing deadlines that must be met. It's a minor inconvenience to type in the redemption code or mail the card in but I think it's worth it in the long run.
From doing a little bit of research, I have found out that the three possible rookie autographs I could possibly get are Freddie Freeman, Aroldis Chapman and Lars Anderson. I would really be thrilled to get Freddie, happy with Chapman and disappointed with Anderson. Since Anderson plays in the Red Sox Organization, I wouldn't be surprised if I got him!
Well there you have it. I'm pleased with what I got but not overwhelmed. I didn't get a Chrome or base Harper prospect so I'll have to buy some retail to hopefully get lucky. I've already started my retail binge of Rack Packs and I've already got some nice cards to show off from those packs at another time.... Until then I will leave you in suspense.
Thanks for reading!
Posted by Ryan H at 3:00 PM