I did a fair amount of Dime Box digging at this show and I pulled out a ton of great trade bait and cards for my collections, I did score some other bargains.  Each of these cards featured in this post I bought for a dollar a piece.  Some may say I overpaid, but I say bargain. 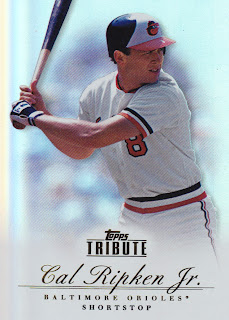 2012 Topps Tribute Cal Ripken Jr.  Don't get me wrong, I like the high end products just as much as anybody.  You just won't catch me buying any (not anymore at least).  This is my favorite Tribute Ripken out of all that I own. 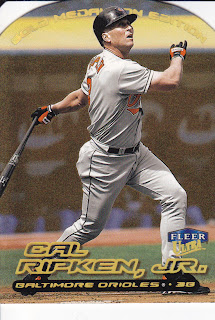 This Cal is Die-Cut.  Since it's the Gold Medallion parallel I had to have it since these don't show up very often. 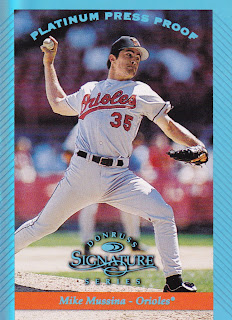 MOOSE ALERT!  The back of the card says its one of 150 made.  I don't think it's #1/150, just one of the 150 made.  Unless anybody has further knowledge on the numbering I'm going to stick with my original hypothesis. 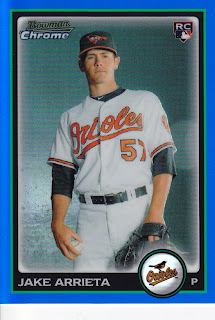 It's appropriate that this card posts on Orioles Opening Day.  Jake was named Opening Day starter for the first time of hopefully many more.  I think this is his breakout season now that he got those bone chips removed from his elbow.  He's pitching pain free for the first time since his college days so I'm interested to see the results.

This concludes my card show posts for the Spring 2012 Show at Chantilly.  I hope you all enjoyed seeing the cards I got as much as I enjoyed showing them off.
Posted by Ryan H at 4:36 PM