I couldn't resist the urge to rip some packs so I picked up 4 rack packs of 2012 Gypsy Queen over the past 2 days.  I think the cards look nice but the huge Gypsy Queen logo is a little distracting.  The player selections seems to be spot on with current players and retired ones too.  These packs are a lot of fun to open ( I guess that's why I made 2 separate trips to Wal-Mart and Target to buy some!).  Soooo you're probably interested to see what I got huh?  Here we go:

These aren't the hobby exclusive mini inserts, just 3 Willie Mays cards out of 12 packs!  Too bad I don't collect the Say Hey Kid. 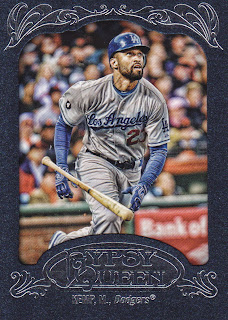 The Blue Framed paper cards look pretty awesome.  I don't think that I could have gotten a better team since the Dodger blue matches the border so well.  I'm pretty sure this card won't last in my for trade list very long. 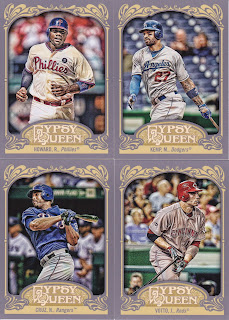 Here's the 4 Photo Variation shortprints.  Another Kemp, Ryan Howard, Nelson Cruz and Joey Votto.  Who's the best player in the group? 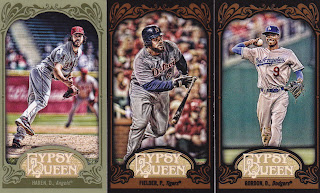 And here come the mini's.  A Dan Haren Green, and Black Bordered Prince Fielder and Dee Gordon.  I like the Black borders but the Greenie doesn't do anything for me.  It's just another parallel for me to chase of Nick Markakis.

Alright, Here's the rest of what I pulled and what's for trade: