Trade with Ryan of The Great Orioles Autograph Project

I recently completed another trade with Ryan from The Great Orioles Autograph Project. We've become pretty good trading partners over the past couple of years and have helped each other's collections immensely.  This go around I sent Ryan a pile of 2012 Topps series 1 inserts that he needed for his set and he sent me back a whole big pile of cards I needed. 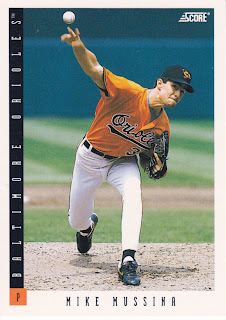 This Mike Mussina card finishes up my 1993 Score team set.  This card has sat on my Top 10 Most Wanted list for quite a while so I am very pleased to replace it with a new wantlist item.  I'm a fan of 1993 Score because of the simplistic design but it's still classy!  It might actually be Score's best design out of all of it's flagship designs.  On a side note, I'm happy to see the orange jersey back in action this season as an alternate. 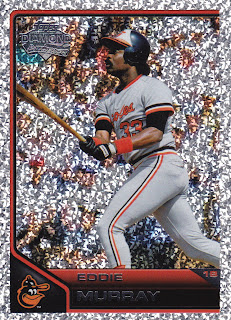 This shiny Eddie Murray card is the last one I needed to complete all of the Topps Lineage variations.  I even have the sticker version! 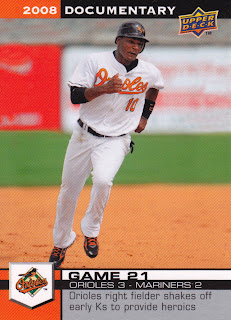 I've said it before I think that 2008 Upper Deck Documentary was a great idea but it fell a little short in execution.  This particular card shows a picture of Adam Jones running the bases but refers to the "right fielder" providing the heroics.  Jonesy never played right field for Baltimore in 2008.  So I wonder who they could be talking about?  I flip the card out and it turns out the right fielder they were talking about was none other than Nick Markakis who jacked a homerun in the 8th inning the give the Orioles the lead for good in the game.  Maybe it's a coincidence that #21 won game #21 with a homerun.

I still need a pile of the Oriole Documentaries so if anybody has any extras, give me a shout!

Thanks for the cards Ryan!
Posted by Ryan H at 5:58 PM