I just completed a trade with Adam of the relatively new blog ARPSmith's Sportscard Obsession.  Adam has been around the blogosphere for a while but just recently took the plunge and started writing his own.  He's a Giants fan so I sent him a bunch of cards from his wantlists and the 3 Willie Mays inserts I pulled from my Gypsy Queen packs. 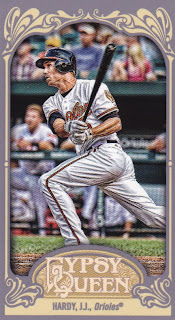 This is the card that started the whole trade.  A mini of JJ Hardy.  James Jerry had a great year last year coming over from the Twins and it earned him a 3 year contract to stick around in Charm City and hand off SS duties to super prospect Manny Machado when he's ready.  Both have had slow starts to the season but I'm sure as the weather warms, so will their bats.  If anybody else has any mini Orioles from Gypsy Queen (especially the regular back minis) let me know, I'd love to trade with you. 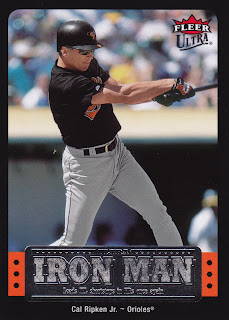 Adam was also able to send a few Cal Ripkens that I didn't have before.  I chose this one card to show because he's wearing sunglasses while batting.  I think this is the only card that I own that shows him donning the shades while batting. 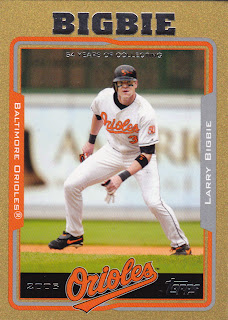 I still have a soft spot for Larry Bigbie.  Thanks a lot David Segui for ruining his career.  I really like this shot of Larry taking a secondary lead from 1st base.  You just don't see this odd camera angle that often. 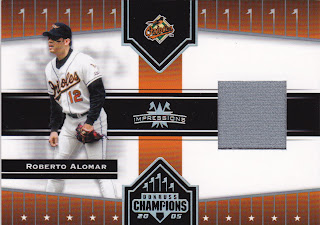 Here's the first of two firsts that was sent to me.  This is my first Roberto Alomar relic card.  Though it is just a plain grey swatch, I still like the card.  Donruss Champions was a pretty neat set when it came to the relic and autograph cards but the base set was a little bit of a mess design wise.  There was just too much empty space for my liking. 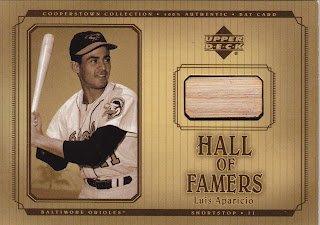 And here's the second of my firsts.  A Lou Aparicio Bat card.  I think my buddy William also got one of these in a trade recently.  It's a really classy looking card in my opinion of a great player.  Everybody says that Frank Robinson was the missing piece that was added to the 1966 WS Champion squad before the season started.  That's true but Lou was an integral part who was aquired 3 years before the 66 season.  In my humble opinion, Little Louie was just as big a part of the team as the Robinsons were and I think a lot of people inadvertently forget that.

Thanks for the awesome trade Adam, I can't wait to trade with you again!
Posted by Ryan H at 1:16 PM