Well 12 hours is just about long enough to hold you all in suspense.  Now, you will see what my big mistake of the show was:

I bought a pack of 2011 Bowman Sterling.  I swore that I would never buy a pack of cards that cost more than 5 bucks.  This pack of 5 cards went for 8 times the maximum that I said I'd ever pay.  I'll just say that my buddy that rode along had something to do with the purchase.

It wasn't all that bad though since I got 6 cards out of a 5 card pack.  Here's the damage: 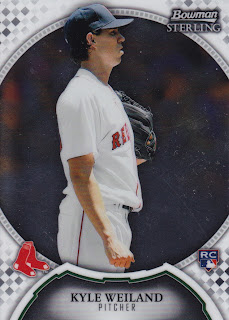 This guy was so highly regarded by the Red Sox that they sent him to the Astros.  He was also ejected in his MLB Debut this past season for hitting Vlad Guerrero with a pitch.  Way to leave your mark on your first day on the job! 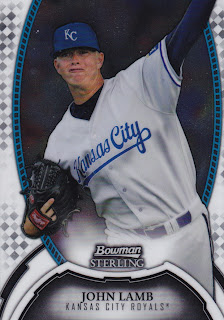 I know a lot of prospects but I can't say I'm familiar with Lamb.  I haven't heard a Little Bow peep about him. 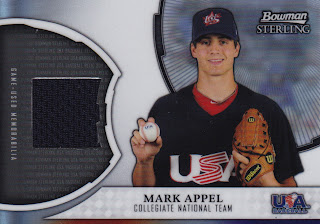 I have heard about this guy since he's a potential #1 pick in this years draft.  I'm not sure if he's going to be the best of the bunch though.

(I'm not sure where these awful, cheesy jokes are coming from tonight) 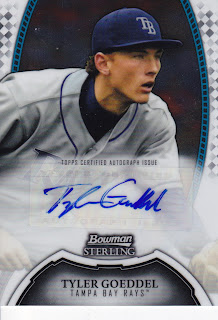 Never heard of Goeddel either.  This STICKER autograph was signed with a dried up sharpie apparently.  Get with the program Topps, Staedler Lumocolor pens is where it's at!

Why the hell does a 40 a pack product have sticker autographs?  Seriously somebody answer that with an insightfully witty and funny response in the comments below. 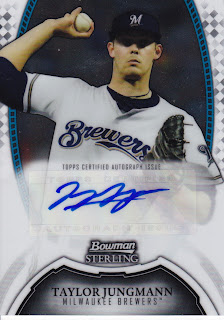 Jungmann is fairly highly regarded as a future big league pitcher.  I would have been pretty excited to get his graph (even though its another sticker, sigh) if I hadn't pulled his 'graph from one of my 2011 Bowman Draft Picks boxes.  At least that one is on-card.  BDP came out around Thanksgiving and Sterling came out in late December.  What's the problem here? 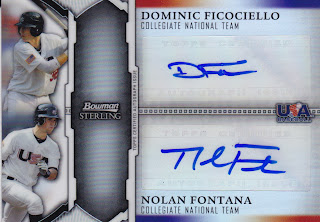 I think this is a bonus hit of the box or case or pack or whatever...  The box says 2 autographs and one relic card in every pack.  I also have Fontana's autograph too.  I got that one from a box break that The Daily Dimwit did a little while back.

I guess I wouldn't have been as disappointed if I hadn't already had 2 of the autographs already.  The design of the cards is nice but the Sticker autos should not be in a $40 a pack product.  There's no excuse.

I'll probably not buy another product with as high a price point of this again, but never say never.  Peer Pressure can be a bitch sometimes.
Posted by Ryan H at 9:31 PM