Group Break Goodies from The Toddfather

I'm coming down from my sugar high and I just realized that I've kept the streak alive for 8 years running now.  For the 8th consecutive year, I've sat down with a bowl of candy and waited, and waited and waited.  Thats right, the average # of Trick or Treaters for the past 8 years is 0.0000000.  This year I thought it was going to be a little different because the wife and I moved to a new neighborhood back in May.  Theres even kids that live on the next street over.  My wife even went to the trouble of making little treat bags up with the small pouches of Sour Patch Kids, Swedish Fish and "Jacks and Bats" pretzels.  All of it for naught!   For some reason, in our new neighborhood, on any given night, all of the houses are lit up like the 4th of july.  Everything was dark tonight except for our house. We are usually the ones with all the lights off because we don't like wasting electricity and the racoons and possums can see in the dark just fine!

So now that I've done my little Halloween rant (candy-induced), I'm going to show off the 3 highlights of a Group Break that Tim over at Home of the Toddfather held a few weeks ago.  I wasn't quick enough to grab the Orioles so I picked the Mariners and A's to maximize my chance at some hits from the Topps Chrome boxes.  GOOD CHOICE! 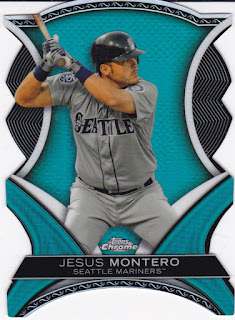 I didn't get that much in the way of base cards or refractors from the 2012 Topps Chrome box but I did get the only diecut.  It's a very classy looking card of Jesus Montero.  I think out of all of the diecut inserts coming out this year, the ones from Topps Chrome look the best. 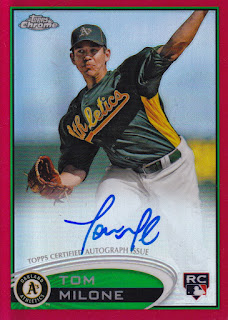 There were also 2 autographs to be pulled from the box and I got a good one!  My gamble on the A's paid off.  I'm convinced now that the A's made it to the playoffs that there will be an Athletics collector that starts a blog.  When this person does, the blogging community will be filling up the comments with trade proposal after trade proposal!  I think I'll be first in line with this red refractor autograph of Tom Milone unless somebody else wants to take it off my hands. 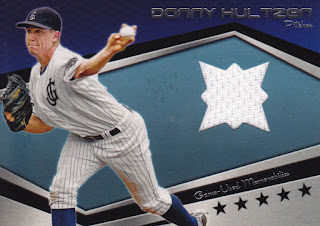 I was very happy with the 2 hits above and wasn't really expecting much from the 2012 Pro Debut box but I got lucky and got a pretty nice GU card of Danny Hultzen.  He played his college ball at Virginia which happens to be my favorite college team.  I hope to make it to Charlottesville sometime soon to see a game!  Hultzen has a shot to break training camp with the Mariners next spring with a spot in the rotation. I'm rooting for him!

Thanks Tim for holding and awesome Group Break!


Speaking of Group Breaks!  My own group break will be kicking off tomorrow evening.  Stay tuned over the next few days to see the results!
Posted by Ryan H at 9:49 PM