I haven't had a bunch of trades coming in like I normally do but the ones I have had were pretty epic.  This particular trade comes from Brian over at 30-year-old Cardboard.  We exchanged several emails and a trade was born.  I was able to help him out with several cards he needed and I was able to rake in a few nice Oriole HOFers.  Behold: 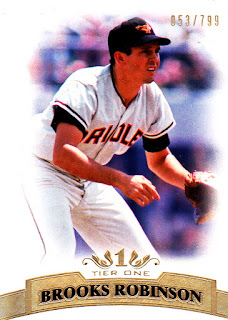 I will assume that Brian grabbed this card on the cheap at the monthly card show he attends.  I love the look of high end cards (usually) but have only once ever spent more than 5 dollars for a single pack of cards.  Tier One is not a set I indulged in but now I don't have to since I have this Brooks Robinson.  The "cloud" that he's hovering in reminds me of a Looney Tunes daydream or thought bubble. 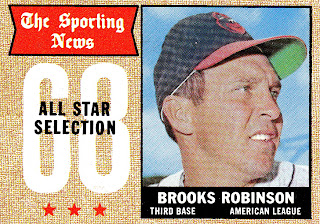 From modern to vintage!  Another nice Brooks card for the PC Binder!  Can't beat the condition on this card either! 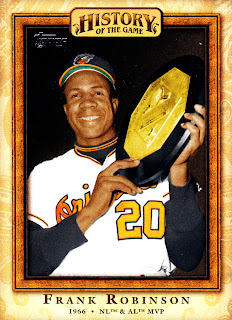 Brian didn't send me all Brooks cards but it is another Robinson.  This Frank goes into my PC binder of him since I already had it for my team set.

Thanks Brian for the awesome cards!
Posted by Ryan H at 8:17 PM