I usually try to make it down to the Diamond whenever the Bowie Baysox are in town playing the hometown Flying Squirrels.  It was Irish Heritage night so the Squirrels were wearing green uniforms and there was a lot of Irish music being played.  There was even a group of Irish Dancers.  my fiancee was working last Wednesday, I decided to fly solo and see if I could catch some good autographs before the game by arriving early.  I got nearly everybody I wanted! Here's the one I wanted most: 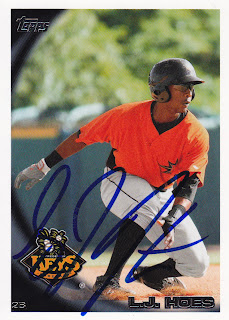 LJ could be the heir apparent to Brian Roberts in Baltimore in a year or two.  I also got his 2008 Bowman Chrome Draft Picks card signed! 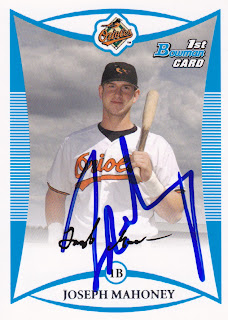 Joe Mahoney was responsible for most of the Baysox offense this night. He had a 3 run triple in the first inning.  His signature looks so much better on this card than the one I got back from spring training this year. 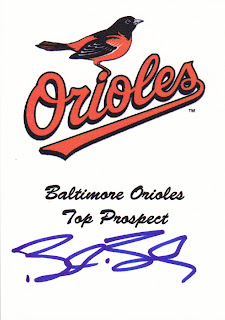 I was also able to get the Baysox starter Bobby Bundy to sign my custom.  He hasn't fared as well in Double-A as he did in Frederick.

If the game had ended after the first five batters of the game, Bowie would have won 4 to 0.  There isn't that much to say about the game after that because Bobby Bundy had a tough night.  I was excited to see him pitch and he did show some bright spots but it just wasn't enough.  He was staked to a 4-0 lead and the Flying Skunks knocked the ball around the yard on him.  The final score ended up 8-5 with Richmond prevailing.  An interesting moment during the game was when Bowie's hitting coach Denny Hocking blew a gasket over a controversial home run and was subsequently ejected.  I'd never seen him so angry but I never saw him play much with the Twins either!

Overall it was a great night to catch a ballgame even though Bowie didn't win.  They are in the playoff hunt so if they make it in, I might try to make it to Bowie to catch a game if my schedule permits.
Posted by Ryan H at 5:36 PM