This trade can be summed up in basically one word:  Shiny!  I contacted Ben over at Baseball Cards Rule about a trade a little while back and we finally hammered out an awesome trade.  He had several Orioles cards I needed and I sent him several cards he needed for his player collections.  Here's a few of the shiny cards he sent me: 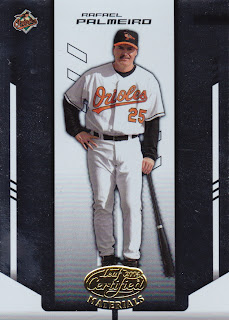 I would guess that Ben is a big Rafael Palmiero fan because there were a bunch of nice cards of him in the package.  This shiny comes from Leaf Certified Materials, a set that I never really paid much attention to.   I never paid much attention to any Leaf cards really.  Their checklists always were confusing to me with so many different tiers and variations to collect.  It really was off putting when they were around. 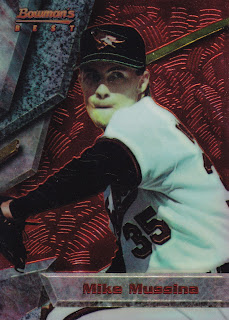 I really like this card of Mike because it looks like it has texture but it doesn't.  Even though the card looks faded, Topps was just getting the hang of Chromium technology back in 1994.  The Bowman's Best sets aren't ones I really paid much attention to before now. 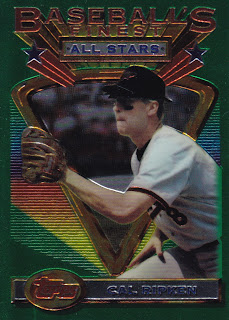 And the Coup de Grace of the package was this card from 1993 Finest.  I've been on the hunt for one of these since it came out and 18 years later I finally get one to fill the hole in my Ripken PC binder.  What a great card!

Thanks Ben for the cool cards!
Posted by Ryan H at 5:21 PM