The cards that are featured in this recurring theme were found by my father strewn about the floor of an abandoned farm building near my childhood home. There were approximately 1000 cards that laid undisturbed from the late 60's to early 90's when he discovered them. Most are in poor condition because exposure to the elements. He recently gave them to me and I will feature them here on my blog. 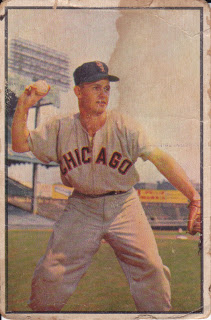 This card I've been wanting to post for a while now, watermarks and all.  This poor card seems like it could fall apart at any moment and I was scared to take it out of the penny sleeve and toploader to put it on the scanner.  Nevertheless, it is being shown here in all its vintage-y goodness.

I never gave Nellie much of a thought before but he was one hell of a ballplayer.  I knew that he was in the HOF but I never really looked at his stats as closely as I did for this post.  While he was not much of a base stealer, he wasn't a big power guy either.  The stat that really jumps off the page at me is that he only struck out 216 times in his 19 year career!  Mark Reynolds has surpassed 200 strikeouts in each of the last 3 seasons.  Nellie Fox seems like the kind of ballplayer who was just solid all around and did all the little things to help his team win.  I guess that's how you stick around so long and end up in the Hall of Fame.  Unfortunately for him, he was posthumously honored in Cooperstown 22 years after his death.