I'll admit that I've gone a little crazy with all of the box breaks lately but this should be my final one at least until Christmas.  Bowman Draft Picks is a product that has for the most part been a hit with collectors over the last few years.  Since I am a pretty big Bowman fan, I actually jumped feet first into the fray and bought 3 boxes on preorder way back in the summer.  Lets see what I got: 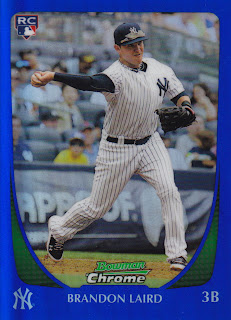 I got just got one blue refractor and its of a Yankee. This one is numbered 2/199.  Good luck Brandon cracking that lineup with A-rod blocking your progression to the majors. 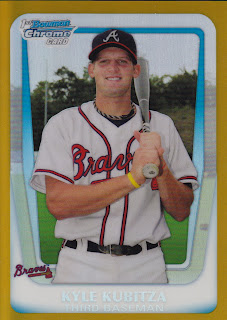 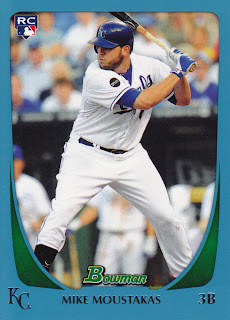 Now this is a little more like it, I know who this guy is.  I got a TTM back from him during Spring Training and have been following him a little bit here and there since.  Not a bad looking border considering the team he plays for.  Mike is #'d 339/499 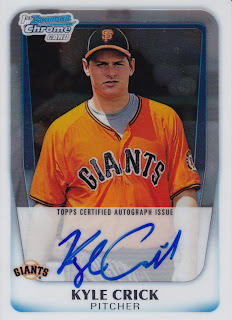 My first Autograph is of the Giants 47th pick in this years draft?  I was a little underwhelmed to say the least until I did a little online research.  Topps screwed the pooch on this one, he was actually the 47th player taken overall! 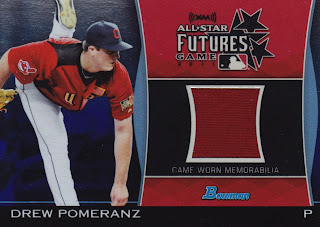 This relic actually came out of a blaster box I picked up at Target.  Not a bad player to get a relic of I guess.  It's numbered 168/199 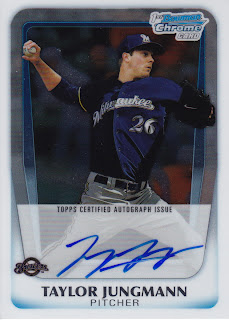 Here's my next autograph of Taylor Jungmann.  I think its pronounced "Young-man". Anyways, it's a pretty nice looking card except for the terrible photoshop job on his hat.  Enough with the awful photo manipulation Topps! 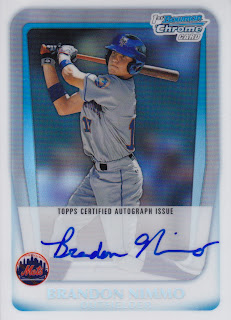 Here's my favorite card of the 3 boxes.  Its the refractor version of the autograph and it really looks good.  Brandon is an interesting story as he comes from Wyoming.  There is no High School baseball in the state so he was drafted on the merits of his American Legion and Travel team play.  Not only was he drafted, he was drafted in the 1st round.  I read about him in my sports weekly and I'll be following his career to see how he turns out.  Also of note, I'm glad that Brandon takes pride in his penmanship.  His signature is legible and neat.  I hope that it doesn't degrade into chicken scratch as he moves up the minor league ranks.

To say that I really enjoyed this year's Bowman Draft Picks product would be stretching the truth.  I'm still a fan of all of the new players but there just seems to be something missing from the product this year.  I was able to finish off the base set and base prospects set so that's a plus but I'm still far from completing the Chrome sets.  I'll get a want list up eventually for those.

Here's a listing of the paralells that I have up for trade: