I contacted the famous Napkin Doon about a trade a bit before Thanksgiving and we were able to hash out a nice little deal.  I was able to fill some Gypsy Queen and Bowman Chrome needs for him and he sent me a pile of nice Ripken and Orioles cards.  Have a look: 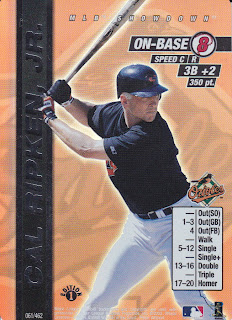 This a neat looking oddball Cal Ripken card.  It comes from the collectable game MLB Showdown that was put out in 2000.  The scan (like always) doesn't do the card justice.  The orange background is actually foil so you know how I like shiny!  I never got into these baseball card games.  Baseball cards are for collecting not to be played with.  That's what they make Strat-o-matic for (I have never played that either!).

Here's a motley crew of Diamond Kings from 2003.  I think in the early 2000's Donruss really bastardized Diamond Kings into something they were not meant to be.  As an Orioles fan, I know neither one of these guys deserved to be called a Diamond King.  Maybe a diamond joker or 3 of Diamonds or something like that! 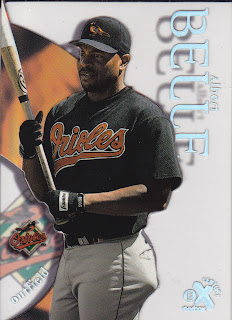 Speaking of Jokers, here's a clear card from 1999 EX Century.  I think Fleer was innovative in their designs and I wish they were still around. 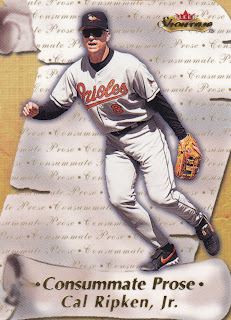 Speaking of innovative, I think that Fleer tried its hand at waxing poetic.

The back of this card back reads: Gray in his hair and a creak in his back, the boy in him still lives for the thrill of the game.  The years fly by, and the teammates change, but this guy still smiles at the crack of the bat. Cal Ripken Jr. has become indelibly linked with the game he loves so much.

I'm sure the designer of this insert set should have just stuck to stats on the back instead of the corny little poem!

Thanks Napkin for the trade!
Posted by Ryan H at 1:37 PM