I splurged on 3 boxes of Bowman Chrome when they went on presale earlier this summer.  For some reason, I've become enamored with Bowman Chrome over the past year and I'm probably the only one in the entire blog-o-sphere that has any interest in building sets of this product.  I think half of my decision is that I seem to have piles of Chromes sitting in my commons boxes as "leftovers" from building base Bowman sets and feeling guilty about it.  Also, I think I need a set building challenge.  Let's face it, building flagship Topps and Bowman sets isn't terribly difficult! These are going to be more of long term projects because buying cases of Bowman Chrome products is out of the question budget. Hopefully I can finds some lots left over on eBay that will help me towards my goal and then I can fill in some gaps with Sportslots and at shows.  So without further ado, here's the highlights of my 3 boxes: 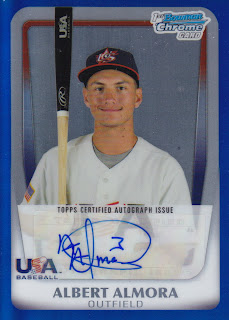 We'll start off with one of the more rare cards from the break.  USA autographs are pretty rare in this years product so you know that a blue refractor is even more rare.  It is numbered but it's not that it really matters anyway.  Al seems to have a nice autograph at this point in his career (I think he is a high school senior and is eligible for the MLB draft this coming spring) but it will probably devolve into some scribble like most players autographs these days. 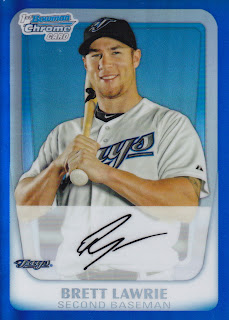 Speaking of scribbles, it leads me to my next mojo hit of a Canadian fella that will be tormenting the O's for the foreseeable future.  Does the facsimile autograph in anyway resemble "Brett" or "Lawrie" to you? 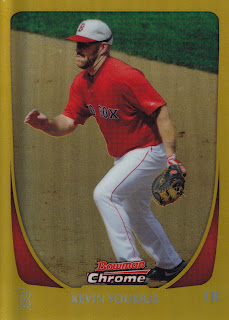 I don't have much to say about this Gold refractor of Youkilis other than it might fetch me a few bucks in trade value or COMC store credit. 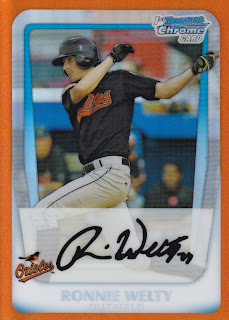 This little sucker popped out of the last pack I opened  Wow, Orioles cards look great on the regular Orange and even better as Orange refractors!  If they weren't numbered so dang low, I'd probably have a couple more of them!  This one is #d 24/25.  I saw Ronnie play this past summer and he seemed like he doesn't like to sign autographs.  He just sat up on the railing while the other guys on the Baysox happily signed for me.  Maybe he just having a bad day or I went to the wrong game. 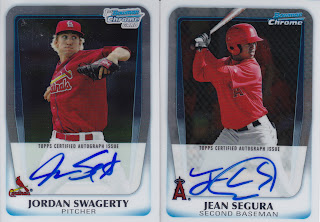 Here are 2 of my autograph cards that I was promised.  From the scouting report on the back, Swagerty seems like he is projected as a back end bullpen guy for the Cards though looking at his Baseball Reference page, he started and relieved this year.  Segura just got added to the Angels 40 man roster and his a highly regarded Top 100 prospect.  I will compliment each of these players on their penmanship.  It even appears Jean ran out of space and just meandered the pen back towards the start his signature! 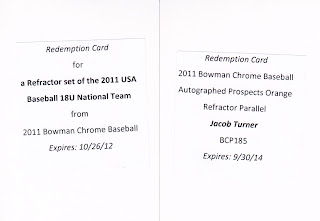 And last but certainly not least, my redemption cards.  I'm not a fan of Topps' new bland design of these redemption cards.  It reminds me of some crap that Pannini would do.  Regardless, the refractor set of USA baseball card excites me a little bit and the Orange Refractor autograph of Jacob Turner is pretty exciting.  This is my second Orange refractor autograph of the year as I pulled a Sean Coyle from regular Bowman this past spring.  If there was another team that looks great as Orange refractors it would have to be the Tigers.  I haven't decided what to do with the Turner yet.  I might try to sell it on Ebay and see if I can turn it into a 1967 Brooks Robinson.

Overall I have no real complaints about Bowman Chrome this year. The cards don't warp up nor are they off-center.  They look great as always and the particular cards I invested my hard earned money in could not have been much better.
If I had one complaint though, it would be the amount of cards per pack.  Across all of Topps' Chrome lines, I think packs should have 5 cards per hobby pack. 4 cards just isn't enough to make the casual collector willing to plop down the cash.  Don't get me started on retail as there are 3 cards per pack.  That's a buck per card.
In particular, I noticed in my 3 boxes that whenever there was an insert, refractor, or autograph, it took place of a base set card.  Why couldn't the "hit" take the place of a prospect card.  The prospect set only consists of 110 cards with the base set consists of 220.  If Topps can't add another card to the pack, don't short me a base set card to put in a hit!

Here's the rest of the inserts and refractors that I will have up for trade: