Trade with Dustin of Coot Veal and the Vealtones

Dustin, from the awesomely named Coot Veal and the Vealtones blog sent me an email a little while back about a Miguel Cabrera GU that he was interested in and offered to send me some cards in return. We have traded in the past so I was happy to make the trade.  Lets look at some of the cards:

The Montanez and Ponson card finished up their respective team sets.  I'm surprised that it took me so long to get my hands on he Bowman Ponson card.  I'm still way far away from finishing up the Documentary Orioles though.  If anybody has any let me know! 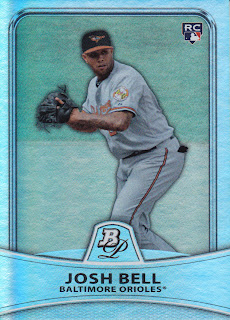 This is the Refractor version of Josh's Bowman Platinum from last year.  I now have the trifecta (base, refractor, and gold refractor).  Josh's stock seems to be dropping in the Orioles system because he can't seem to make the best of his opportunities when he gets them in the majors.  Maybe he'll get his strikeouts under control and can reestablish himself as a prospect. 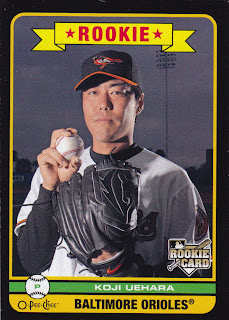 I'm real happy to have this black bordered Koji in my collection now.  The cool part is that if you turn the card over, it is the blank back parallel.  While it's not exceedingly rare, it's still cool in my book! 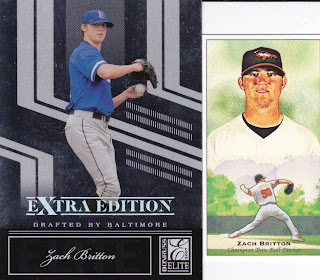 Here's the Zach Britton portion of the trade.  Both cards are new to me so I'm happy to have them. 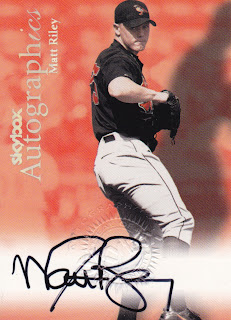 From one promising young lefty to a (once) promising young lefty.  When I returned to the hobby in 1998 Matt Riley was the #1 Orioles prospect in the O's farm system.  He had a great fastball and a good curveball and was destined for stardom.  Sure he had attitude problems and a maybe was a bit lazy but he had potential.  Then he got hurt. Pretty much after that, he was done in Baltimore after that.  I guess I jumped on this autograph card because he was the first real prospect that I paid close attention to and fiended after his cards (as much as a 15 year-old kid could!).  I guess this card just brings me back and that is why most of us collect card in the first place: nostalgia.

Thanks Dustin for taking me down memory lane and sending such an awesome package!