I was on the receiving end of the Pay if Forward Project that was started by Fuji.  I'm not sure everybody knows what the project is or have heard of it so I'll explain it.  The idea is to send a package of cards, memorabilia or anything else that may fit into the recipient's collection.  The recipient then makes their own package up and sends it to anybody else who is deserving of a surprise gift.  The sender doesn't receive a return package though, hence the name Pay it Forward.

Richard, more commonly known as Dawgbones sent me this awesome package of goodies this past week.  I had gotten an email from him last weekend asking what shirt size I wore.  I replied and really didn't think anymore about it.  Around the middle of the week I got a box in the mail with these goodies inside: 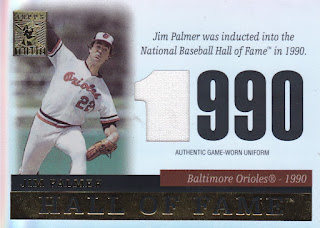 Dawgbones somehow knew that I didn't have any Jim Palmer relic cards in my collection.  This is a Topps Tribute relic card from the 2004 release.  I really wasn't expecting a package, much less a relic card of an Orioles HOFer! 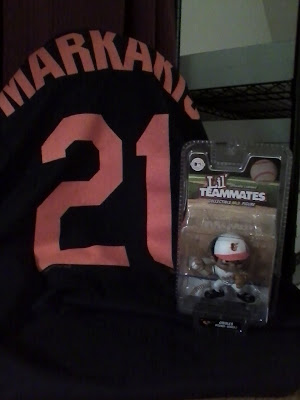 Thought it a little tough to decipher from the picture, I got a t-shirt in the box.  It's my first Markakis shirt!  It's hard to believe that since he's a big part of my collection that I didn't own a shirt to wear of him.  I also got a little figurine that you can see on the right of the photo.  That will go nicely on the shelf with my other bobbleheads in my man "cove".

I was very grateful to get the package in the mail from Richard.  Receiving a mystery package really brightened up my day.  I've already sent a package out to somebody who deserves it, so they should get it in the next few days!
Posted by Ryan H at 11:51 AM