After this trade post, I should be all caught up on my backlog!  It's only taken me a month and a half to accomplish this task.  This trade comes to me from a reader of the blog named Scott.  He contacted me a couple weeks back about some Orioles cards that he had from my lists and wondered if I would be interested in them.  A deal was struck and soon after these cards showed up in my mailbox! 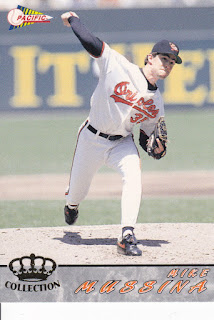 At a point in time, I was not a Pacific trading cards fan.  I'm not sure what my reasoning was but I have changed my tone over time.  Now I can't seem to get any  enough of Pacific.  The earlier years from 93 thru 97 seem to be tougher to come by for one reason or another.  I all I want is the Orioles! 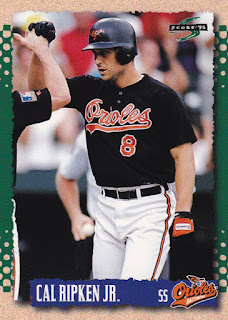 This Cal Ripken from 1995 Score finishes off the team set. Another one bites the dust but only eleventy billion others to go. 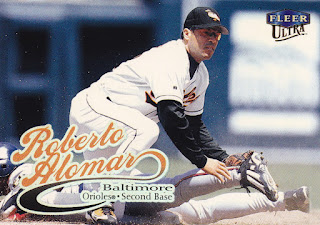 I like the action shot on this card.  I'm having trouble figuring out who that is sliding into second though.  Let's play some "When Was It?"

I'm going to venture to say that this picture was taken on April 4th, 1998.  The Orioles were hosting the Tigers in a Saturday afternoon game.  I'm going to guess by the angle of the sun and Alomar's long sleeves indicating the early season game.  (Game time temperature was 50 degrees and sunny that day).  The orange stripe on the leg of the sliding player tell me it's Tigers outfielder Brian Hunter. He swiped 3 bases on Chris Hoiles that day in a 2 to 1 losing effort. Even though he stole a base the next day (Sunday the 5th) Alomar didn't play that day until the 8th inning.  Even then there were no stolen base attempts by the Tigers in the 9th inning.

Thanks for the cards Scott and thanks for helping me me play "When was it?"!
Posted by Ryan H at 8:09 PM