Trade with Tim of Home of the Toddfather

This trade is also yet another tradebait closeout.  This one is from Tim at The Home of the Toddfather.  I think the name of his blog rocks!  I've always appreciated Todd Helton so I think it's cool that there's a blogger out there who shows his appreciation by naming a whole blog for him! 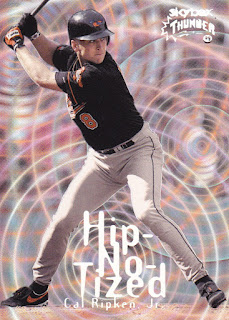 I've mentioned before that finding Cal Ripken cards that I don't have is becoming tougher and tougher.  Its hard to believe that when there are over 10000 listed on Beckett.  This one is from 1999 Skybox Thunder.  It's an interesting insert set name wise.  Why the hyphens in between "hip-no-tized" 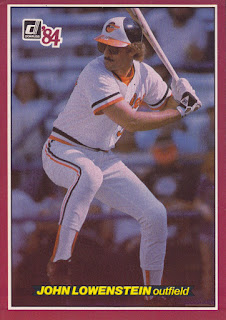 I don't remember showing a John Lowenstein card on the blog before.  Its funny to go out to eat these days and you see kids with the shaggy looking hair, the giant birth control glasses on, and skinny jeans.  I just don't get it.  AND GET OFF MY LAWN! 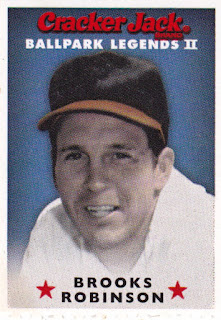 Here's a pretty cool mini oddball of the Orioles HOF 3rd sacker, Brooks Robinson. I always get Cracker Jacks when I go to a live ballgame and the "prizes" they give out are super lame.  Who wants to learn something while eating caramel covered popcorn?  I want baseball cards as a prize!  Hell, even a pencil topper or book mark would do. 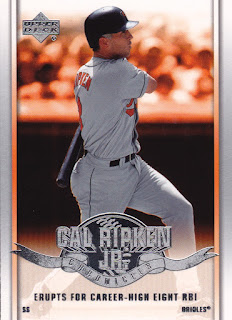 Tim also sent me a Cal Ripken Chronicles that I needed.  2007 was a big year in Cal Ripken cardboard since it was his induction year.  Upper Deck also went a little nutso on the inserts too.  I have all of the Ultra Iron Man set (1-50) but I only have a handful of Cal Ripken Chronicles.  On a side note, I did pick up a few  2007 Upper Deck packs out of the Target $1.59 in an effort to snag a few more of the Chronicles but I failed, miserably.  Just a bunch of junk base cards.

So now that I've insulted all of the hipsters and pissed of the Cracker Jack people off I'm going to end this post and say thanks to Tim for the cards he sent.
Posted by Ryan H at 5:58 PM