Trade with Matt of DocHoloday.com

Here's another one of my Tradebait closeout trades.  This one is from Matt at DocHoloday.com.  We've traded a few times in the past and he's a participant in my group breaks too.  I sent him some Red Sox cards and he sent me several nice cards in return. 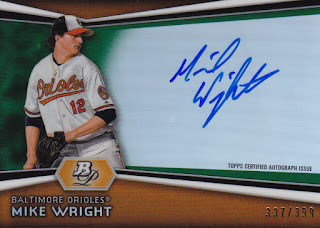 I already had the regular version of this Mike Wright autograph from this years Bowman Platinum but I decided to go ahead and trade for the green refractor version too.  Can't have too many on-card autographs! 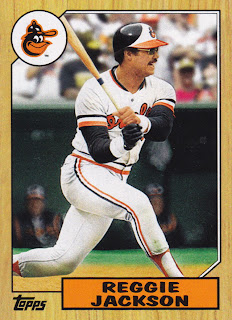 I might have said before that there aren't many cards featuring Reggie Jackson as an Oriole.  I was pretty surprised to see Topps make a 1987 Mini of him since 99.9 percent of the world doesn't even  know he wore the orange and black for a season.  This card goes straight into my team set binder for 2012. 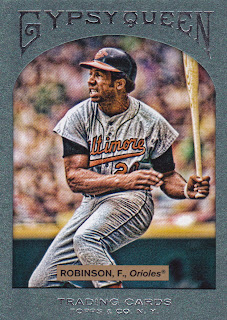 I just recently added Frank Robinson as a personal collection focus.  After he nearly wrecked my National Experience a few years ago and hearing horror stories from other people, it was hard to do.  I had so many cards of Frank sitting in my Orioles doubles box that I decided to put them in a binder so they wouldn't get mixed up.  This Green paper parallel from 2011 Gypsy Queen will sit nicely in the binder along side the base version.

Thanks as always goes out to Matt for the trade!
Posted by Ryan H at 10:30 PM