Trade with Greg of Plaschke, Thy Sweater is Argyle

Here comes another trade post courtesy my Tradebait Blowout.  This one is from Greg of Plaschke, Thy Sweater is Argyle.  You can find his trade recap right HERE.  We've traded a few times in the past and this one is no less a blockbuster than the others.  I acquired a few nice pieces of tradebait as well as a few nice Orioles cards to add to the collection. Here's the 2 highlights: 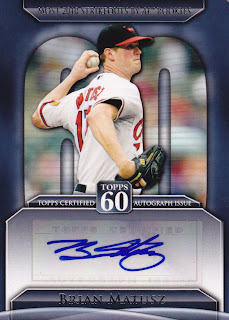 Brian had an up and down season for the O's.  He won the 5th starters job out of Spring Training and proceed to get shelled for most of the first half of the season.  He was demoted to Triple-A Norfolk to the bullpen and was summoned back to the big leagues as a LOOGY.  He was fairly successful until he gave up the second of the Geritol swilling bag of bones Raul Ibanez's second homerun in the playoffs.  I'm still rooting for Brian to make it as a starter but it looks like his future may be in the 'pen.  Speaking of pens I'm glad to have this autograph in my collection as it is the second of Brian's that I have. 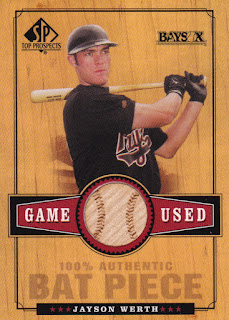 As far as I can tell, there are no Orioles GU or Autograph cards of Jayson Werth in the MLB uniform.  I was shocked to find out that Jayson did have this minor league GU card which I had to have.  I'm fascinated by the fact that Jayson started out as a skinny, glasses wearing hipster looking dude as a catcher in the O's farm system.  I'm not totally convinced that he is the same guy that turned into the wolfman outfielder that now roams the Nationals outfield!  Take a look at his 1997 Bowman rookie card and look at a card from 2012 product.  Even if he is the same dude, I'm shocked that the Orioles traded him to Toronto for Jon Bale!

Thanks for the trade Greg!
Posted by Ryan H at 7:37 PM