I got my first taste of 2012 Bowman Platinum on the way home from work the other day.  I stopped by Target, which is becoming a more rare occurrence lately, and picked up 2 packs of the newest product on the shelves.  Target is no longer on my direct route home anymore so stopping by to browse the shiny foil packs isn't as convenient anymore.  Here's nearly half of the cards I got for my money: 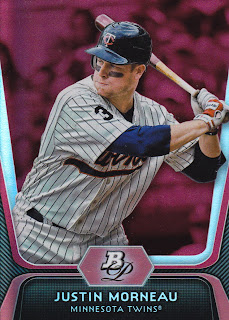 I believe this is a ruby parallel of Justin Morneau.  Well, I know it's Justin Morneau but the parallels in Bowman Platinum are almost as difficult to discern as they were last year.  The ruby background works well with the Twins uniform color scheme. 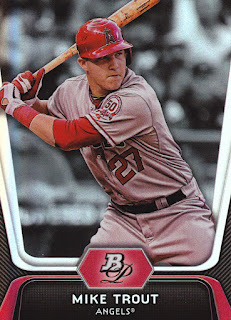 I'm pretty thrilled to pull this Mike Trout card considering that I only bought 2 packs.  I'm thinking about adding Trout as a PC since I already pulled at Bowman Chrome Refractor, Bowman Draft Picks Chrome Refractor, Diamond sparkly, and Cognac Diamond sparkly rookie cards from last years packs.  He's been great for my joint fantasy team this year and he's only going to get better! 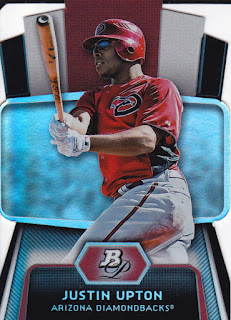 Now this is a sweet card.  I'm glad that die cut cards are working their way back into products over the last year or so.  I think it just makes the card so much more interesting when it has neat geometric designs for borders.

I like the product so far and I wish I had the funds to buy a blaster or 2 of it.  I think the design is nice, the inclusion of diecut cards and a decent chance (1:33) of pulling an autograph makes this a winner.  There is a drawback for me being an Orioles fan.  Topps seems to hate the Orioles this year, only putting a minimal number of O's cards in their sets.  Adam Jones in the only player in the Paltinum base set.  Though they did put Manny Machado, Dylan Bundy, and Jonathan Schoop in the prospects set it's still a bummer to not have a base card and related parallels of Nick Markakis or JJ Hardy to chase.  I think this is going to be one of the deciding factors in purchasing more Platinum.  I love ripping open packs and pulling a card of my favorite team.  I only have a 1% (from the base set at least) chance of pulling the only one.  I have a 15 percent chance of pulling a Yankee (8 cards) or a  Red Sox player (7 cards). I actually got 3 in my 2 packs in Cano, A-Roid, and Teixeira.  I guess I'll just have to start saving my pennies for Chrome to come out in a few weeks!
Posted by Ryan H at 7:09 PM