Trade with Dan of It's Like Having My Own Card Shop

Now that I am back from blogging hiatus and back into full trade mode, I recently set up a trade with Dan of  It's Like Having My Own Card Shop.  He saw the Chris Young GU card I pulled from my 2012 Allen & Ginter box and sent an email my way.  Lo and behold we came to a trade agreement.  Dan already chronicled what I sent him right HERE .  Here's a couple of the cards that I got in return. 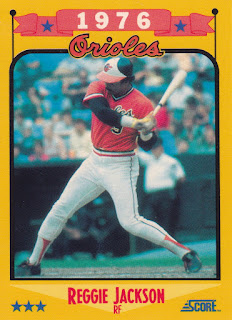 There aren't many cards of Reggie Jackson wearing the Orange and Black for the Orioles.  This is the card I'm using for my "One Card of Every Oriole" binder since it is the most time period appropriate card of him.  So I will mark off another card from the journey to find at least 1 card of each player to ever don the thread of the O's. 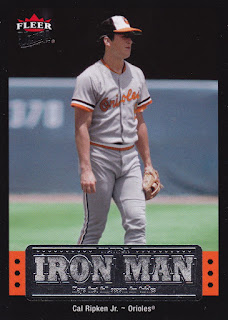 I know I've mentioned this before but it's getting tougher and tougher to find cards of Cal Ripken that I don't have.  Heck, it's even getting tough to find cards from this insert set that I don't have!  I really like the Ultra Iron Man set that Fleer Upper Deck put out in 2007.  I'm pretty close to completing the set so check my list to see if you can give me a hand. 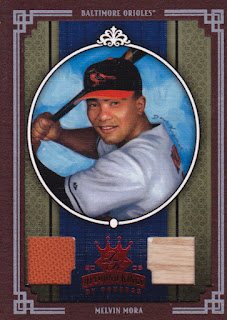 Here's the centerpiece of the trade.  I'm not the biggest MelMo fan out there but I do respect the way he played while he was in Charm City.  There weren't many players that performed as consistently for the team the way he did in the 00's.  There were so many washed up players and burned out prospects that came through the Orioles in that decade that it sometimes makes me wonder how we won at all.  It makes me thankful for the way the 2012 team has played thus far.  Back to the relic card, I really like that the swatch is orange and the whole outer border is raised up a la UD Masterpieces.  Plus it's numbered to 100 copies.

Thanks Dan for the nice cards, I hope we can trade again one day.
Posted by Ryan H at 1:34 PM