As I am officially back on the blogging train, that also means I am back, open for business in regards to trading.  Brendan, a reader of mine who doesn't have a blog (that I know of), contacted me again and offered up some cards that I could not resist.  This is my second trade with Brendan: 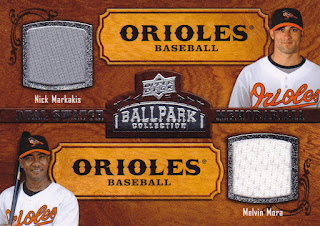 This card was actually not in our original trade agreement.  He put this card in as a surprise and it was a good one.  I've had my eye on this particular card on COMC and Ebay for a while and never pulled the trigger on it.  I guess the cardboard gods had planned for Brendan to send it to me in a trade. 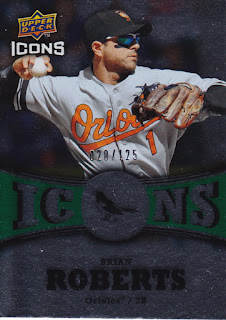 This card was one of the original cards that he sent me a scan of.  Poor Brian Roberts.  This guy can't catch break.  He's had a myriad of injuries the last couple of years including a bad back, concussion issues and now a torn hip ligament or something.  Hopefully he'll be back at full strength for Spring Training 2013 and he can contribute like he used to.  I'm sure as frustrated as the O's fans are with his body breaking down, he's probably more disappointed that anybody on the planet. 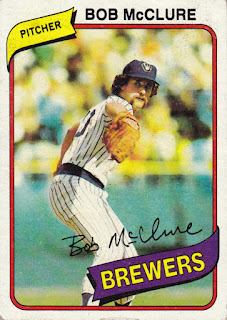 Brendan also sent me a pile of semi-vintage cards for the sets I am slowly working on.  A couple 74's, 76's and 80's Topps commons.  I had a hard time trying to figure out which card to scan because there were several Pirates, Yankees, Phillies and Blue Jays cards in the lot.  Pirates from the 70's are the devil (for O's fans, think '71 and '79 World series), Yankees are always the devil, and the Blue Jays and Phillies just bug me for some reason.  I guess the Brewers are the least hated of the quintet of teams even though they did knock the O's out of the playoffs the last day of the '82 season.  I'm not sure if Bob McClure had anything to do with that days loss or not.

Thanks Brendan for the great cards and conversation pieces that you sent over!
Posted by Ryan H at 6:56 PM