I'm finishing up a few loose ends here and this one is a smallish trade that I swung with GCRL.  I sent him a Dee Gordon international parallel from this year's Bowman and he sent me a couple of nice cards in return and as a "pay it forward" for some Dodgers cards I'll be getting in the future. 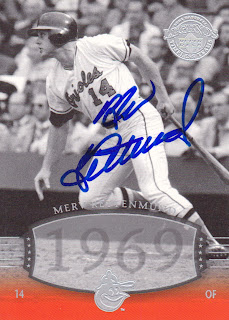 Jim included this TTM of Merv Rettenmund. I don't know that much about Mr, Rettenmund except that he was part of the well stocked Orioles farm system of the late 60's and early 70's.  Merv was a great hitter and was forced to stay down on the farm because the players that were roaming the outfield in Baltimore were great at the time.  Nice problem to have!  One of those players was this guy: 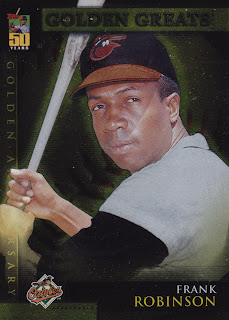 While he came from the Reds (the team that Rettenmund was eventually traded to in a separate deal) his career went thru a renaissance of sorts.  He won the MVP award and also led the O's to a couple WS berths and became one of the more beloved players in Baltimore's history.