Trade with Kerry of Cards on Cards

I'm just about caught up on my trade post backlog so bear with me for just a couple more posts.  I believe it is important to post the trades that I complete to not only show appreciation to my trade partners but to also educate the 3 or 4 readers of my blog.

I believe this package showed up from Kerry over at Cards on Cards on Christmas Eve.  To be honest, I forgot what I sent him but I'm sure you can read up on his haul from the trade on his blog. 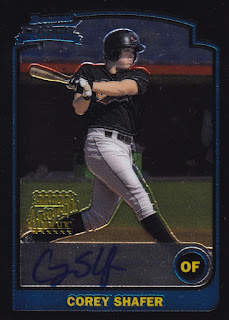 Ever since the late 90's I've been a pretty close follower of the Orioles farm system.  I've only begun to realize that the O's farm system was mostly barren during this time period right up until just the last few years.  Sure, there were a couple of guys who graduated to the big leagues, but there were many that just didn't make it.  Nevertheless, I still collect the autographs of these players like Corey Shafer above.  Judging from his Baseball Reference page, it seems as though Corey probably was dogged by injuries and ineffectiveness when he was healthy that lead to his inability to make it out of Hi-A ball.  Baseball is a tough sport to make all the way to the top even if you are the best player on your high school team or even the best player on your college team! 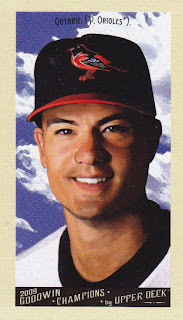 Aside from the craziness of the numbering of the 2009 Goodwin Champions set, the cards were really nice.  I'm not going to go into the nuances of the numbering of the base set or the mini set here but if you really want to get a headache, head over to BaseballCardPedia and look it up.  Either way, I'm happy to have this Jeremy Guthrie mini from the product since it's only available as an extended series mini.  If I ever decided to go for the entire team set of minis, I'd have a good start with this card. 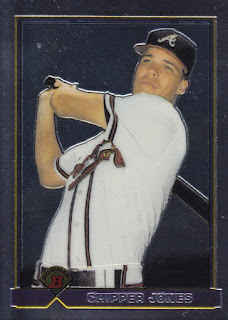 Apparently I'm not the only one who pays close attention to my side bar.  Kerry included this Chipper chrome reprint because he noticed that I have a smallish PC of Larry Wayne going.  He's not a priority by any means, but I do enjoy getting cards of Chipper from dime boxes and throw-ins from trades. 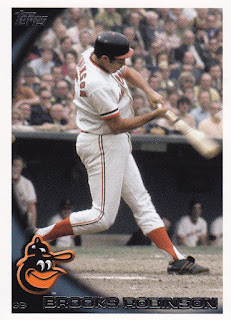 Another surprise card in the package was this Brooks Robinson SP from 2010 Topps.  I do think the HOF veteran SP's add a little bit of umph to the products.  The SP's in general don't really bother me that much except when they have to photoshop jerseys onto the likes of King Albert, Carl Crawfish, and Jose Reyes. 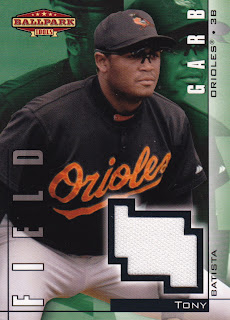 I'll close out this trade post with a relic card of Tony Batista.  With perhaps the most unorthodox batting stance in the history of the world, he was the biggest star the Orioles had in the early 2000's.  He sure could hit the ball a long way when he could get all those moving parts of his windup working together but he soon played his way out of Baltimore after only 2 and a half seasons.

I'd like to thank Kerry for the trade and also thank the readers of this blog for putting up with my stupid jokes and uneven commentary.
Posted by Ryan H at 3:38 PM