I got a nice package of cards from Charlie over at the Lifetime Topps Project.  I was able to send him a good chunk of card he needed for his various sets.  I was happy to do so since I have already completed my Lifetime Topps sets.  His project is a little bit more ambitious than mine but I applaud him for that.  He's collecting the inserts he likes and the traded sets whereas I only have the plain jane base set from 1982 to the present.  So let's take look at what he sent me in return: 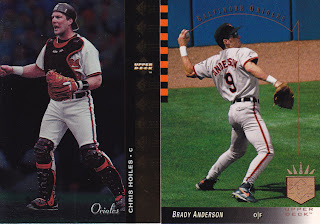 These 2 Upper Deck SP cards complete the team sets I'm building.  It always feels good to complete one of them and 2 at the same time is doubly satisfying! 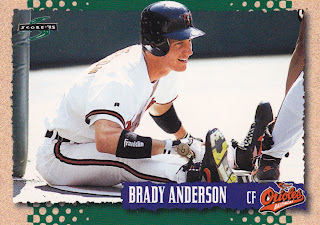 Here's a nice candid of Brady stretching and sharing a laugh with a mystery player of camera.  Brady has not taken his retirement laying down though.  I remarked a few weeks ago that he looked in great shape at FanFest and that he could probably still play.  Well, I read on Roch Kobatko's blog yesterday (Orioles beat writer) that he has an unusual training routine for the O's players he worked with this winter.  It included handstands.  Brian Matusz who's more than 20 years younger than Brady can only handstand for only 10 seconds.  Brady is walking around on his hands doing pushups! 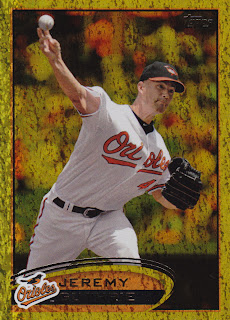 Another Goldie off the list.  Fare the well in Colorado, Jeremy! 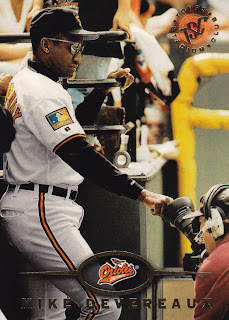 This is a pretty interesting shot of Mike Devereaux. It looks like he's giving the cameraman a lens full of fist or showing him where his World Series ring would go the next year with Atlanta! 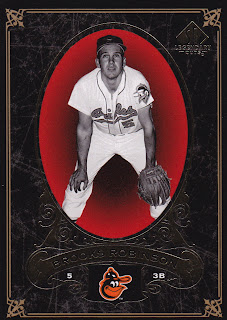 I'll close this post out with a classy looking SP Legendary Cuts card for Brooksie. The Marble frame paired with the red background really make the card stand out.

Thanks for the cards Charlie, and good luck on the rest of your project!
Posted by Ryan H at 11:54 AM