I was going through my trade bait box the other night and I ran across this card that I bought at a card show either late last year or earlier this spring.  I meant to post about it but I think that I just stashed it away before it got scanned.

Anyways, you can see it's a Frank Thomas card from 1993 Leaf.  Since THE BIG HURT was the bees knees 20 years ago he got his own insert set.  I even believe that he was the coverboy for the packaging of the product too.  I'm a fan of 1993 Leaf and Frank Thomas but those are posts for another day.

As you can see, there is some writing on the card.  As a matter of fact, it looks to be Frank's signature.  I did some research on 1993 Leaf and while Frank did officially sign some cards for the set, I don't believe that this is one of them according to my crack research team.  I can tell by looking at the writing at an angle that it s definitely not printed on the card so that's definitely not the case. 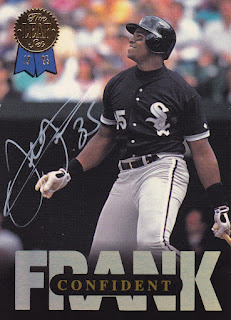 So, I like to dream that this card was signed in person by Frank Thomas himself and not some s-head dealer or kid scribbling on some baseball cards.  It looks pretty close to his signature from the examples I've seen.   I distinctly remember paying only a dime for this card, so you can imagine that  I have some doubts about the authenticity.

So what do you think, is it real or not?  Weigh in blogosphere.
Posted by Ryan H at 3:07 PM