I'm way late to the party when it comes to this years Update series but the longer you wait to buy a hobby box, the less you have to pay for it!  I bought this box at the CSA show the weekend of October 12th-14th for 48 dollars.  It was a bit of an impulse buy but I think I made out rather well on this box.  Actually, I can't think of a better flagship hobby box that I've opened in terms of the cards I got out of it! 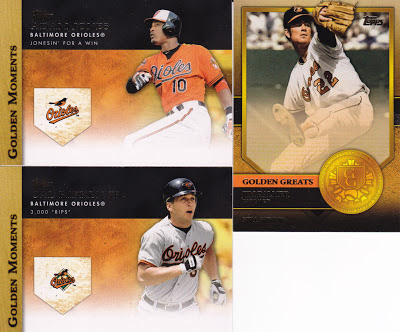 I also did fairly well on Orioles inserts too.  I got the Ripken and Jones Golden Moments, as well as the Palmer Golden Greats!  Not too shabby but I still need another copy of each to finish out the team set since each of these will be heading into their respective PC binders. 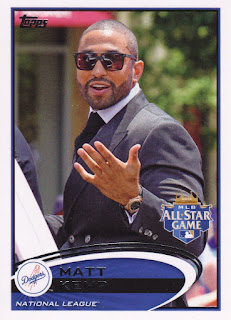 I was pretty stoked when I got Matt Kemp's SP variation card.  Then I realized that there would be a feeding frenzy between Spiegel, Plaschke, and Night Owl to see if they can trade me for it.  Anybody want to take bets on who sees it first?  HAHA!  I think the SP variation cards are pretty cool ever since Topps has been inserting them into packs.  The jersey variations and the diamond sparkles are/were stupid.  I really want a Jim Thome Orioles card but I don't have 200 bucks to spend on one.  The Jose Reyes and Albert Pujols jersey variations were dumb too.  If you really wanted them in their Marlins or Angels jerseys that bad, why not wait another month and a half and get them in Heritage as base cards? 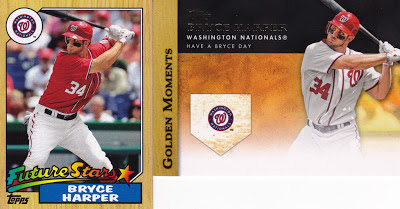 I think I may have bought into the whole Harpermania hype a little bit.  I haven't gone crazy buying his cards or anything but I have been lucky and pulled quite a few from packs.  I guess that happens when you buy a lot of Bowman products!  The streak continues with the Golden Moments, the 1987 mini, and the All-Star card (not shown).  I think he does have a bit to learn about playing baseball at the top level but I do respect the way he plays the game with his hair on fire.  I think the maturity will come with age and as long as he keeps his mouth shut and lets his bat do the talking, he'll win over more fans. 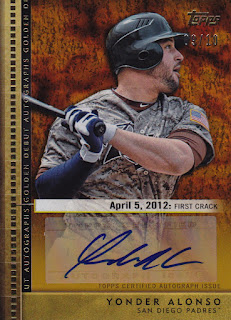 Here's my hit of the box, and it's a goodie!  Yonder Alonso seems to have a bright future out there in San Diego.  There are regular versions of this insert and then there's the #'d to 10 gold sparkly version that I have!  These cards are one in 16,680 pack pulls!  Holy Crap!  That's 463 hobby boxes worth!  I haven't quite decided what to do with the card yet but I'm leaning on putting it on eBay or COMC if no Padres fans can blow me away with an offer.  What do you think I should do with it?

Here's all of the inserts and parallels that I pulled from the hobby box and the retail packs I opened.  Everything is for trade!

Lastly, here's my needs list to complete my set: