I went to a card show this past weekend.  It's the one I normally attend at the Dulles Expo Center in Chantilly, Virginia.  It happens 3 times a year so luckily there is enough time for me to save up enough money to make going there worthwhile.  I usually go on Saturday or Friday afternoon but I had prior commitments this time that prevented me from going either of those 2 days.  I had to go on Sunday once before  and the crowd was not as large but everything seemed to be picked over.  This time was no different.  The crowd was small, dealers started packing up at noon, and everything seemed to be picked clean. I did get some good deals but I'll try my hardest to make it on Friday or Saturday next time.
I had a plan that I formulated in the car that I was going to try to knock out a bunch of sets that were on my wantlist, pick up a bunch of Orioles cards for my team sets, and buy some much needed boxes and 9-pocket pages.  Once I walked thru the doors, I think I forgot why I was there.  I got some cards from my set wantlists, almost totally struck out on my team sets, but thankfully restocked my supply of storage boxes and binder sheets.  One and a half out of three isn't too bad.
The show wasn't a total loss though.  I picked up a bunch of cards for sets I'm beginning to build like 2011 Allen & Ginter, 1980 and 1979 Topps.  I knocked some wantlists down to next to nothing including 2012 Topps series 2, 2012 Allen & Ginter, and 2012 Bowman Chrome Prospects.
I also picked up a bunch of great cards out of the bargain bins including those starter sets.  I didn't see any nickel bins but there were plenty of dime bins.  Here's a few that I picked out of the dime bins: 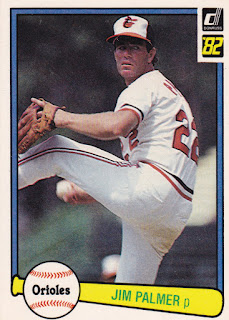 Yeah, a 1982 Donruss Jim Palmer does not belong in the dime bin.  It belongs in my Palmer binder!  Can't beat this one for a dime!

Not minis but great rookie cards of awesome players.  Pudge and the Big Hurt will end up in Cooperstown one day and Kid K's career has been great so far.  If he keeps it up, he might soon be mentioned in the same breath as Koufax, Drysdale, Valenzuela, and Hershiser.  Each of these cards set me back a dime! 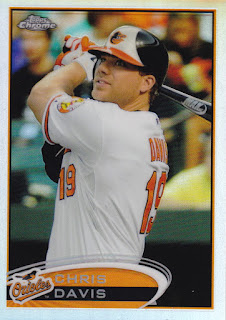 Whoever put this in the discount bin must have known I was coming to take a look see.  Davis has really grown on me during this past season.  He mashed 30 home runs and they all seemed to come in bunches.  Unfortunately for Birdland, he didn't hit any in the playoffs.  Instead he spent most of his time flailing at pitches in the dirt.  If he ever learns some plate discipline, he could hit over 40 bombs!  I still need a ton of Topps Chrome Orioles from 2012 including baseb card, regular refractors, Xfractors, Purple, and Orange.  Even if you have just one of them, please contact me. 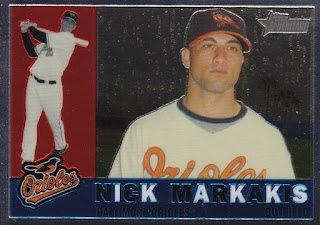 I paid a buck for this sweet Nick Markakis from 2009 Topps Heritage Chrome.  I really think that if Nick wasn't out with a broken thumb (thanks a lot F.F. Sabathia), our playoff outcome could have been better.  Nick is the best pure hitter on the team and he's the most clutch out of anyone on the roster.  I'm pretty sure he could have come up with that key hit we needed.   That's baseball though, there's always next year. 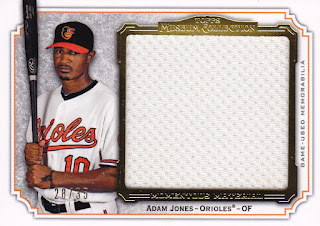 There's no way I could resist this classy looking relic card of Jonesy.  It's numbered 28/35 which is pretty cool (right below his forearm).  I can't afford buying expensive boxes  like the ones that relics like this pop out of, so I let the suckers bust those boxes and capitalize buy buying the singles as they desperately try to recoup their loses.  I win every time because I only paid 6 bucks for this card. 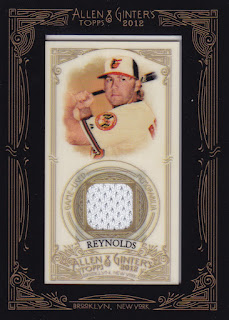 I bought this card from the same dealer that sold me the Markakis Chrome above.  He had just traded a guy for it while I was walking up to his table so I got this card for 3 bucks.  WIN AGAIN! 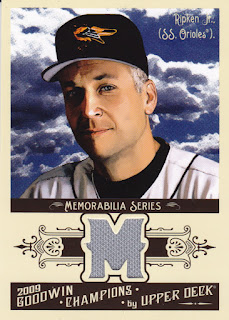 I'm going to close here with another Ripken game used card.  I picked this one up for a measly 4 bucks!  I'm going to focus on the darkside of Cal's face.  I think that's the side of his face that likes the Yankees.  He sure had plenty of praise for the pinstripers during the TBS broadcasts of the ALDS and not much to say about the O's.  I understand that he's just doing his job but I think it not only broke my heart to hear him praise Arod and Jeter but it probably hurt a lot of Orioles fan's perception of him.  He probably felt he had to compensate because people that aren't normally baseball fan is a Yankee fan come playoff time (well except they don't show up to the park!) and he didn't want to sound like a "homer" .  He ended up over-compensating and .angering his fanbase instead.  It's OK to piss of the Evil Empire, Cal!  You're still my favorite all-time player though.  I'm sure he could win some of that fanbase back by doing some MASN broadcasts next year.  (GET ON IT MASN, SERIOUSLY!!!).

So, overall I had a decent time.  I think the crowd was small because football is in full swing and the O's and Nats had just lost on Friday night.  While not the best CSA show I've been to, but I still got some great cards!
Posted by Ryan H at 5:43 PM