Something a little different

First off, I want to thank everybody for their quick action in claiming and subsequently paying for their teams in my latest group break.  The boxes have been ordered and hopefully I can start ripping and posting the results soon.  The end of this week thru the beginning of next week is looking awfully busy though!

I've got a case of the Mondays, so here's something a little different to show off: 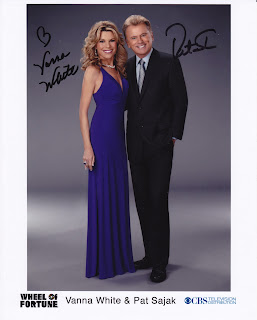 I requested this autographed picture from the official Wheel of Fortune website. The wife is a big fan of the show so I also got her a copy too.  I can tell that they are actually signed and not an autopen signature because the signatures are oh-so-slightly different and the placement is a little different too.

Pat is a pretty big baseball fan and hosts his own radio show about it.  He's attended Orioles games in the past and has actually been in the booth during a 2011 Spring Training game vs the Red Sox!

Vanna, has one of the nicest smiles on TV, and is never hard on the eyes to look at.  She's always dressed to the T's in fancy evening gowns.  She was also crowned "TV's most Frequent Clapper" by the Guinness Book of World Records in 1992!
Posted by Ryan H at 5:29 PM