I just wanted to show off a few of my auction wins that I've gotten over the last few weeks. 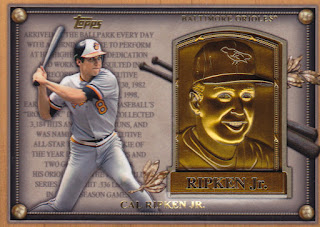 When I first saw these manurelic plaques, I knew I had to have the Cal Ripken version.  I really really like this card.  Topps really knocked it out the park on these shiny, heavy behemoths.  They even have the actual HOF plaque in the background for each individual player on the checklist.  It's a nice touch! 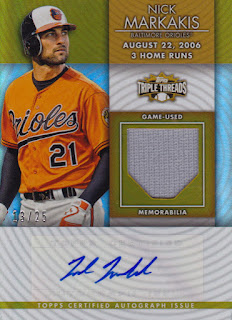 I "accidentally" won this card.  I was watching the last few minutes of the auction on ebay and put in a bid with about 1 minute left.  I was for sure that I would get outbid but luckily for me, I didn't!  I love the Orange jersey that Nick is wearing  BTW, this card is the gold refractor version and it's numbered 13/25! 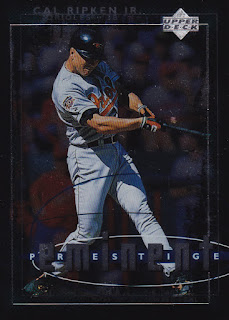 Here's one of my Listia wins.  I'm still pretty new to Listia but I have had 12 or so autions.  I'm glad I was able to bid and win this card.  I hadn't seen one before and I was quite shocked to see it on Lisia! 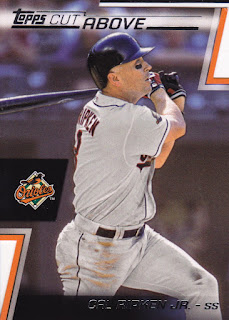 My final auction win is this 2012 Topps A Cut Above Cal Ripken, also from Listia.  I used to love die cuts back in the day and they have made quite a comeback this year in Topps' products.  I just hope they don't overdo them so that nobody will care about pulling one after a while.

So as you can see I'm active on both ebay and Lista.  I don't have a bunch of Fans on Listia so if you have an account, don't be afraid to "Fan" Me!
Posted by Ryan H at 6:11 PM