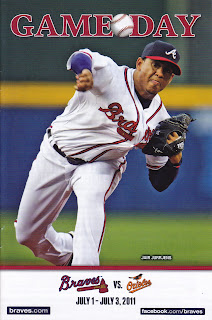 A good friend and co worker of mine have been planning a trip down to Atlanta since the Braves played in Baltimore 2 years ago. He's a big Braves guy mostly because of his grandfather, and the triple-A Braves playing in Richmond.
From an Orioles fan's standpoint, it was a terrible game as Adam Jones produced the only O's hit. Jair Jurrjens held the Orioles offense in check for the entire game. We had great seats as we were sitting in the seats right beside the ball boy on the right field line. That lucky kid got to warm up Jason Heyward every inning! As luck would have it though, he didn't get one single foul ball the entire night!
So the game ended and I was going to try my luck at getting some autographs at the players entrance. This was the first time I had ever staked out the players entrance so I wasn't really sure what was going to happen.
I was able to get the tough-luck Orioles starter from that night Jeremy Guthrie on this 2009 Upper Deck card. 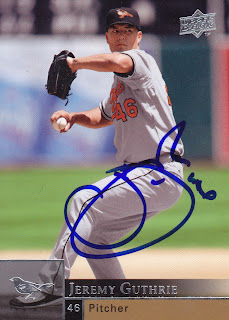 I also got Craig Tatum as he exited the stadium as well as Robert Andino and Jason Berken. Berken has been in the majors for 3 years and Topps hasn't produced a card other that this When They Were Young card. They could have taken one of Buster Posey's 3 regular Topps cards (ROY, Rookie Cup, or regular card) out of the set and given Jason a proper rookie card. That is why we need Topps Total!

I was also able to get Buck Showalter as he drove out in his rented Chevy SUV. He was nice and didn't seem to mind signing for an Orioles fan. 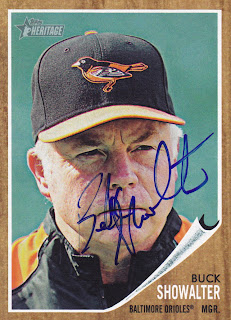 After the team bus left, I decided to head back to the hotel to get some sleep and get ready for day 2. Upon meeting up back at the hotel my friend actually got some Braves Autographs on some cards that I gave him. The most notable card he got that night was Jair Jurrjens on his 2008 Topps card. He was stoked!
Saturday was a big day so I can't wait to write about it... Stay Tuned!
Posted by Ryan H at 7:15 PM