Sunday July 3rd was the final day of the Braves series and the final day of my roadtrip down Interstate 85 to Hotlanta. I woke up around 7:30 and got all my stuff packed up and ready to go. My Friend and I went down for breakfast early and soon found ourselves at our respective players entrances.
I was determined not to miss Baseball Jesus (Matt Wieters) today. He was the first to show up that day as his wife dropped him off. He was dressed to the nines and was in a good mood. (Maybe he knew that he was going to be named an All-Star later in the day!) He signed my 8x10! I wish I would have gone with a medium tip pen but the autograph still looks great! 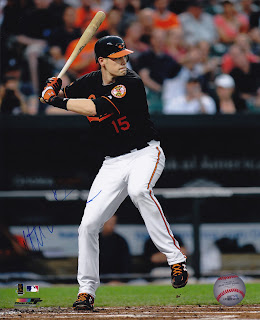 Matt would turn out to be the only autograph I got all day but it didn't matter because I was still on cloud nine. I had a couple of opportunities to get more 'graphs but since I had gotten most of them in the last 2 days I didn't want to be a pain and seem greedy. One player I didn't have and wanted was Derrek Lee. He was very "elusive" to say the least. It didn't seem like he really wanted to sign the autographs that he did give. He did one on Saturday and 2 on Sunday morning. I was not lucky enough to get one. Oh well, maybe TTM will lead to better results. I also was unable to get JJ Hardy who was a target of mine going into the weekend. He didn't sign either day but at least he was nice about it, politely declining.
I was excited to see Zach Britton get the start for the Orioles this day and he cruised through the Braves order for the first couple of innings. He even hit a homerun to help himself out but it would not hold up. He ran into some trouble in the 5th or 6th inning and in came the bullpen. Being down by one run Mark Reynolds stepped up to the plate with a man on and hit a bomb deep into the seats in left field. It was his 3rd in 2 days! The bullpen came in and shut the door on the Braves and the Orioles salvaged one game of the 3 game set.
I would say my time in Atlanta was a positive experience. There wasn't a single negative thing to put a negative spin on the weekend other than having to leave to come home.
Posted by Ryan H at 7:20 PM