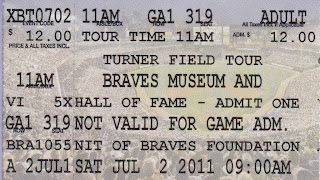 Saturday was a long day that had me and my friend about 12 hours at and around the ballpark. We got ready and went over to Turner Field for the tour. It was relatively educational and getting to see all the different areas of the ballpark was pretty nice. I even got picked on by the tour guide because I was more or less dressed from head to toe in Orioles gear. After the tour was over we looked around the Braves Hall of Fame and then walked across the street to a Restaurant call "The Bullpen". The food was good and it had air conditioning. It was stifling in Atlanta all weekend.
Luckily for me, the Orioles player's entrance was basically right across the street from The Bullpen. When I showed up, I was informed that I missed Matt Wieters. Dang it! I had an 8x10 that I really wanted signed. Next up Chris Jakubauskas and Blake Davis arrived via cab. Chris told us it was our lucky day and he was feeling "saucy"... whatever that means.. I used a Blank from 09 OPC on Chris and a blank 10 Upper Deck shot of Camden Yards on these guys. I was the only one that had anything for Davis to sign. He seemed shocked that nobody else wanted his signature. 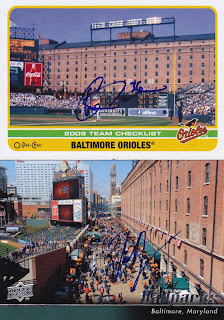 Next to show up at the park was the Orioles starter for that day, Jake Arrieta. He seemed to be in a good mood and signed for everybody that wanted one. I got his rookie card from 2010 Topps Chrome signed. Its my favorite CARD I got signed all weekend. The blue ink just pops right off the card and his name is fairly legible. See for yourself: 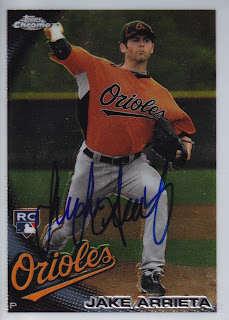 While I was 'graphing all 3 days I met a nice lady who had season tickets for the Braves. Mike Gonzalez is her favorite player I learned after inadvertently bashing him when striking up a conversation. Mike has pitched much better lately and I hope he keeps it up. I think a switch back to his old mechanics has something to do with it. Anyways, he showed up at the players entrance after the team bus and couldn't have been nicer. He took pictures and willingly signed for everybody. Here's mine: 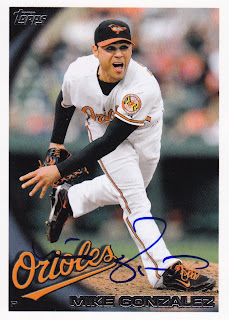 Around this time, about 4:30, we decided to head inside the park. I really like that the Braves allow fans into the stadium 2 and a half hours before first pitch. It seems like a good business model because hot and hungry fans standing are liable to buy concessions and souvenirs when they don't have much to be interested in.
I wasn't interested in eating or buying any souvenirs. I was interested in batting practice and autograph opportunities. We found our seats in right field RIGHT NEXT to the Braves bullpen and watched the Braves take batting practice until we couldn't stand the little ankle biters yelling "HEY""HEY" at the players on the field for a ball. I politely told them to call the players by their names and you might have better luck. They didn't listen, so, annoyed I headed for the Orioles dugout.
Luckily, Mark Reynolds came out and took some ground balls and before heading to take some hacks came over and signed some autographs. Blue ink on the Gypsy Queen cards looks awesome. Check it out: 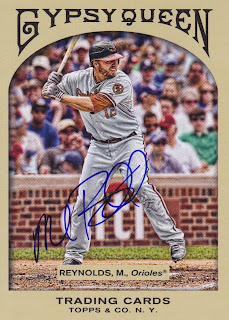 No other players signed while I was standing there until minutes BEFORE first pitch. Adam Jones signed only minutes AFTER I had left the O's dugout. I happened to glance back and much to my chagrin he was signing away for some of the kids gathered where I was standing.
Fast Forward to the top of the 4th inning. Mark Reynolds at the plate, he crushes a long fly ball to center that clears the fence for his 16th homer of the season.
Here's a link to the video: http://baltimore.orioles.mlb.com/video/play.jsp?content_id=16518661
Now, this may not seem that significant to you but to me it is. Yeah it gave the O's the early lead (which Luke Scott helped relinquish), but is was more significant. I have that very ball. Yes THE homerun ball. I am not in the video but watch where it lands. I'll wait....
The security guard from the Braves bullpen walked all the way over to centerfield and picked up the ball. Apparently, security is not allowed to toss baseballs into the stands because he had it in his hand until he got back into the dugout and tossed it to the bullpen catcher, Eddie Perez. He looks at it and sees 2 scars from hitting the railing and looks around. He sees me, the only Orioles fan in the area, dressed head to toe in my O's garb and tosses it to ME! I couldn't beleive it! I've gotten balls at AA and AAA games but never at a major league game. Not to mention a homerun ball!
So the Orioles ended up losing the game so I decided to stake out the players entrance again. Upon reaching the gate, I told a few people about my good fortune and showed them the ball. About this time, Robert Andino comes out of the door. One of the ladies who I showed the ball to calls out his name. (I find out later that she got to know him really well at Spring Training). He smiles and motions for her to come over. He gets her in the gate and direct access to the players as they board the team bus. It's nice to have connections like that! About 10 minutes later, I hear "Hey Oriole Guy, come over here!" from the lady behind the gate. I hurry over and she asks me for the ball and my ticket and tells me he (Mark Reynolds) is going to sign both of them for me! BADASS! He signs it and hands it back to her and she brings it to me. Check it out: 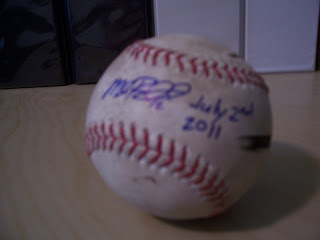 I'm sorry for the blurry picture, but my camera is old and I don't have any good batteries for it at the moment. You can make out the scars from where it hit the railing or whatever in center field on the right and top of the ball. The signature looks great and Mark even took the time to put the date on it. So I have Mark Reynolds' 136th career home run ball, Autographed. A True 1/1 collectible!
Overall it was a great day! I got plenty of autographs including 3 from Mark Reynolds! Anything that happened on Sunday was just gravy!
Posted by Ryan H at 8:16 PM