I went to the Chantilly card show last weekend and I am just getting around to posting up the results of what I was able to pick up. I'm going to show my top 10 favorite cards over 2 posts (the second post will be tomorrow). Without further ado: 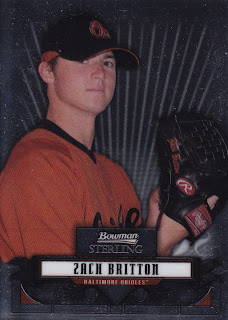 10. 2008 Bowman Sterling Prospects Zach Britton. I've been looking for this card for a while now and I found it in none other than a bargain bin for a quarter. That's right Bowman Sterling for a quarter. It makes me wonder why "collectors" will pay so much for a "box" of cards and end up selling the base cards for peanuts. I personally will never pay more than 5 dollars for a pack of cards no matter what.
I feel bad for Zach though. He was demoted to double-A which he was none too happy about. I was expecting this sort of move by the Oriole front office at some point during the year to stave off his free agency another year (like the Rays did with Longoria and Royals with Hosmer and Moustakas this year.) The Orioles officially say that it was performance related (he has been getting knocked around the park lately) but O's fans are smarter than that. The O's front office wasn't going to bring him to the big leagues until late April/ early May just for the reason of keeping him under team control for another season. I think McPhail was just waiting for Zach to have a bad outing and use that as an excuse for a demotion. The mid-summer circus has truly arrived in Baltimore and won't be pulling out until the end of September. 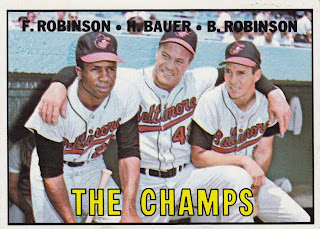 9. 1967 Topps #1: THE CHAMPS. I did pay a little more for this card but it is totally worth it. This card really is a classic combo card. Not like the garbage of Jose Reyes and Hanley Ramirez standing around in the outfield with their hands down the front of their All-Star warm up jerseys. 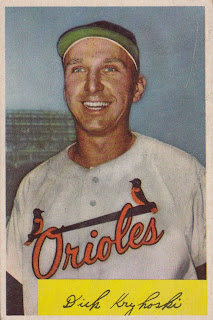 8. 1954 Bowman Dick Kryhoski. I like 1954 Bowman better than the 55 version. Period. It just seems more classy than the woodgrain TVs. 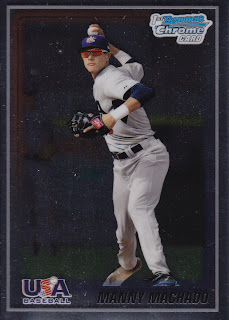 7. 2010 Bowman Chrome 18-U USA National Team Manny Machado. This is one of my Top 10 Most Wanted Orioles cards. I haven't figured out a replacement for this one on the list yet.
I'm trying to get in on the ground floor with this guy before he really turns into the mega-prospect all the scouts think he'll be. I picked up a few other of his cards at the show and you might see him later on in this countdown. 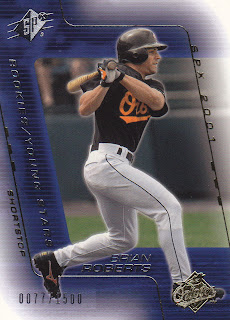 6. 2001 Upper Deck SPX Brian Roberts Rookie Card. I have other Rookie cards of Brian but not as nice as this one. It has a low serial # which is cool but not like it matters. It was a little pricier but I'm happy with the purchase.
There are 2 schools of thought on Brian right now. There are a lot of people saying he is done and others say he still has some fuel in the tank. I'd like to say that I think he still has some good years left in him. Injuries have totally messed up his last 2 seasons but when he gets fully healthy(and stops sliding head first into 1st base) he will be fine.
Stay tuned tomorrow for the conclusion of my card show report.
Posted by Ryan H at 7:29 PM