Another FanFest has come and gone.  Everybody says that this one wasn't as good as last years but its probably all in who you ask.  There weren't quite as many people there as the last 2 years, but at least it was a little easier to get around the convention center without bumping into somebody every step you took.
I had a blast and I'm pretty sure everybody there had a pretty good time.  Willam from foul bunt drove up from North Carolina the night before and stayed in my spare bedroom.  He brought along his 6 year old son Chris who seemed to have a good time there too.  It's been my experience with my nephew and various other small kids I know that its hard to keep them entertained and focused on anything for more than 5 minutes.  Chris was very well behaved and didn't complain one bit.  He just has a bladder the size of a dime!  I had a great time hanging around with William all day and it made the time go by faster since we both had some of the same autograph vouchers.

So, I'm going to start showing off my Fanfest acquisitions with the smaller items I got signed. 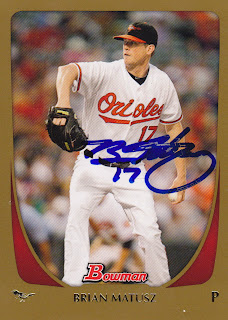 Here's my Brian Matusz 2011 Bowman Gold parallel with a nice blue signature on it.  Unfortunately, the signature bubbled up a little bit because I didn't bother prepping it since I'm using Staedler markers.  Apparently they dry instantly and arent supposed to smudge.  I'm wondering if its just the closeness of the letters in Brian's autograph that caused the bubbling. 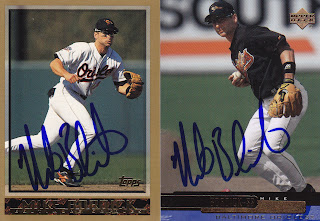 Mike Bordick was at the same station as Matusz.  He was nice enough to sign two cards for me.  If he hadn't signed both I wouldn't have been upset.  I just had them mounted side by side in my notebook.  I got him to use the same pen as Brian and neither of these signatures messed up.  Mike's signature isn't as compact as Brian's either so there might be something to my theory.  Obviously the 1998 Topps, 2000 Upper Deck, and 2011 Bowman cards have similar gloss on them so I might have to test my theory on some common cards. 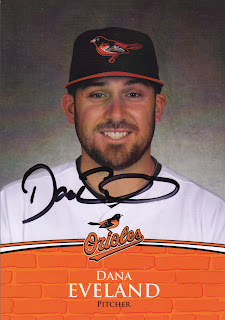 Here's one of the newest Orioles, Dana Eveland.  His career numbers leave a little to be desired but apparently Dan Duquette sees something in him that would make him send a minor leaguer to the Dodgers for him.  I read an interview with him and he says that "he learned how to pitch" last summer and I guess it showed when los Doyers called him up for a look see in September.  His numbers at the tail end of the season were pretty decent, so there's that.  I'm a little apprehensive about him so I hope he makes a believer out of me this season.  BTW, Chris got this one for me since he was allowed to go through the kids only line. 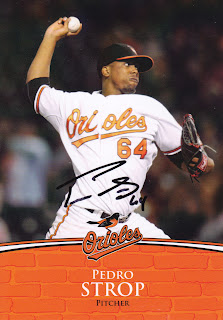 Here's another one that Chris was able to get for me.  Pedro was basically shipped from Texas to Baltimore for Mike Gonzalez.  During the last month of the year he was pitching lights out.  He threw a lot of strikes and didn't look like he was afraid of any of the batters that he faced which is a breath of fresh air from some of the other pitchers I've become accustomed to watching.  I'm looking forward to seeing how he does this coming season.

Next up: Some signed baseballs.
Posted by Ryan H at 7:29 PM