Another Trade with Ted of Crinkly Wrappers

Ted and I just recently pulled off another awesome trade.  The two of us have been blogging for about the same amount of time.  We've traded with each other a number of times that I have lost count.  He always sends great stuff and if you have traded with him, you know I'm not kidding.  Lets take a look at a few of my favorites from the package: 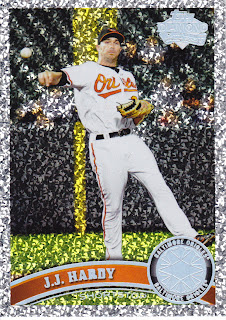 Here's a sparkly JJ Hardy from this years update.  This is actually the only Hardy that I know of that shows him acutally in an O's uniform.  His Heritage and Gypsy Queen cards are photoshopped from Brewers or Twins duds.  This JJ's card is notable to me because he becomes my wife's favorite Oriole now that Luke Scott is now a Tampa Bay Ray. 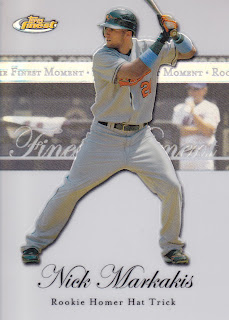 Here's a pretty sweet card from 2007 Topps Finest.  Obviously, by reading the card you can see that Nick hit 3 homeruns in a game during his rookie season. The date that he accomplished this feat was August 22nd 2006.  It's notable to me because I remember what I was doing that evening.  I was sitting in a bar celebrating a 21st birthday with a chick that I was totally infatuated with at the time.  I even drove her drunk ass home that night and helped her stumble across the parking lot to her apartment.  Nothing happened that night or ever with her just in case you were wondering (or care!).  So yeah, Nick the Stick, 3 HRs, 21st Birthday, no Nookie! 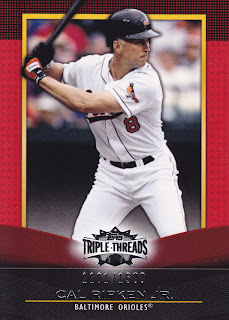 Here's a card that took me by surprise when I was opening up the package.  I was able to find most of the Orioles from this years TTT at a show back in October at bargain basement prices with one exception: Cal Ripken.  Now thanks to Ted's goodwill, I have it for my Cal binder(s).  I'm not in love with this  last year's design, but it's still a really nice card.

Thanks again Ted, you always raise the bar when it comes to our trades.  I try my best to return the favor!
Posted by Ryan H at 10:28 AM