Trade with Brian of Play at the Plate

I was contacted by Brain from PATP a few weeks ago asking for my address and saying that he had a nice stack of Orioles ready to send me.  Of course I sent my address along and started to wonder what he might be sending.  I had been saving a stack of Rangers for him so I dropped those in the mail as soon as I could.  A few days went by and these awesome cards ended up at my house. 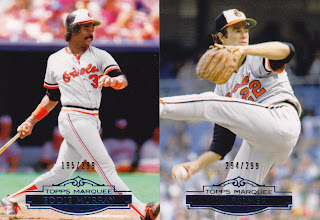 I can't complain with 2 Oriole HOFers, especially high-end parallels.  Marquee is out of my price range but I have picked up a bunch of O's from trades and shows for bargain bin prices.  I can honestly say I've never busted a pack that is more expensive than 5 bucks other than Jumbo packs of Topps flagship.

I think Brian mentioned he had the Orioles in a group break randomly assigned to him.  I think that's where the Sepia Markakis and the Heritage Chrome Jones came from.  Lucky pulls for him me! 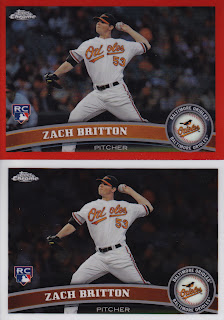 The Orange parallel Britton and the Orange Jones above came out of the retail Chrome value packs.  I almost pulled the trigger on buying both on COMC but I'm glad I didn't since I was able to trade for them.  Now all I need is Derrek Lee and Nick Markakis to finish up the team set.  I also scanned the regular Chrome version of Britton just cuz I think it's his best looking rookie card of the year.  For some reason, the horizontal picture just does it for me!

Thanks Brian for the great cards!  I've already started a new Rangers stack with your name on it for our next trade.
Posted by Ryan H at 7:35 PM