Trade with William of foul bunt

By now I'm sure most of you know William from the foul bunt blog and his son Chris stayed at my house on Friday night before FanFest last Saturday.  I asked him to bring his box of Orioles cards for trade and that he could look through my traders too.  After we had dinner and got Chris in bed, we started digging through the boxes and here's a few of note that I found that I needed: 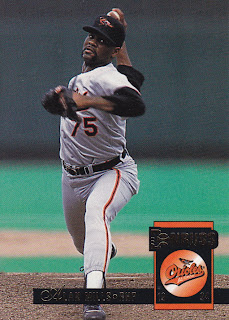 I'm happy to hear that Alan Mills is back in the Orioles organization.  He's going to be the pitching coach for the Aberdeen Ironbirds this season.  They are the short season New York-Penn league affiliate of the Orioles.  I always liked Mills and he had a bulldog attitude out of the 'pen.  I always wondered why he wore #75 though.  Barry Zito is the only other player I know of that has worn it.  BTW, this Mills card completes my 1994 Donruss team set.  '94 Donruss is probably my second favorite Donruss set behind the 1993 version. 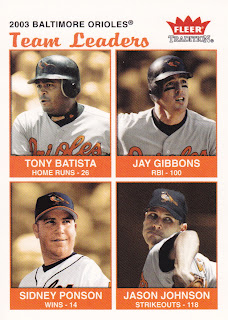 It scares me to look at this card and seethe 4 players shown.  More scary is that they were the team leaders. 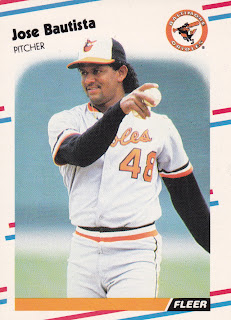 Surprisingly this is my first Fleer Update card from 1988.  Since it's from the "over-production" era, I would have thought I'd run across a few more of the Orioles.  If anybody has any of these or 89 Fleer Updates, let me know! 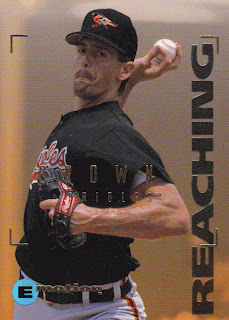 I've noticed that the emotions from most of these 1995 Fleer Emotion cards aren't really emotions.  I've never seen the "Reaching" emotion.  What an odd set, but there were some pretty good photographs. 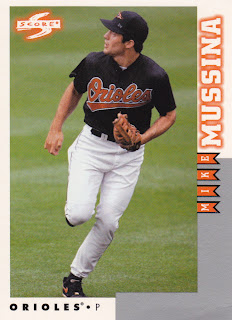 I'll close with this shot of Mike Mussina shagging fly balls during batting practice.  It's just an interesting card to me since most of Mike's cards show him on the mound.

Thanks Again to William for the nice trade and for attending FanFest with me.
Posted by Ryan H at 7:47 PM