I had the itch today at work to break some packs. I decided to stop by Target on my way home to see if they had any National Chicle. They didn't have any so I got some 2009 Topps T206 instead. I bought 6 packs. Here are the highlights: 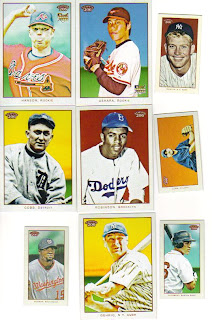 The Koji is a SP variation and an Oriole to boot! Nice. A Tommy Hanson RC. Not bad. He's sticking his tongue out saying "Try to hit this, ya Bum". A couple of nice cards of some HOFers and some minis. The Ellsbury is a Polar Bear SP back. I believe that the Mantle Mini is a variation. I did a little research and I think this one card more than paid for the break. Overall I guess this quelled the pack breaking urge until my boxes of 2010 Bowman arrive. All of these except the Koji are for trade if anybody needs them.
Posted by Ryan H at 7:23 PM