I'll admit that I am a sucker for dime boxes at a card show. I think everybody loves a great deal. One particular dealer at the card show had 2 tables on the end of a square of tables that was full of monster boxes of cards. He probably bought a large collection and just put them all out there for team set builders (like me!) and player collectors to pick out what they wanted. Here we go: 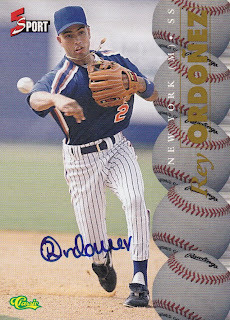 I pulled this card out because I remember seeing somebody's havelist of their Rey Ordonez player collection. I don't remember who it was/is so anybody who knows, please let me know. This is a certified on-card autograph as the back says so I hope the person who needs it may come forward. 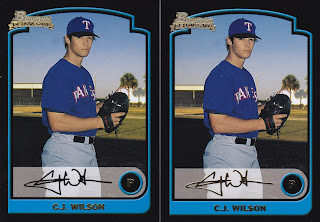 These were the dime boxes so I picked up the regular and gold signature Bowman rookie card of CJ Wilson. Since he is the best starting pitcher on Texas' roster right now, I though why the heck not. 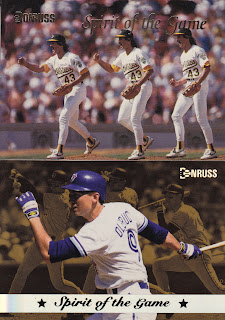 I always liked the Spirit of the Game inserts that Donruss had in the mid 90's. I remember pulling the Roberto Alomar one from a pack that I bought at the drug store in town. Man, when was the last time I saw baseball cards at a drug store? 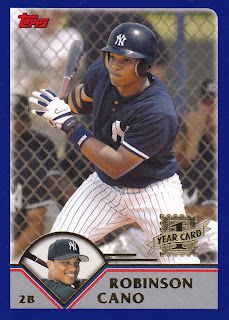 This Robby Cano rookie card was in an unopened opened pack shoved in one of the monster boxes. I guess everybody else who searched through the boxes before me were too lazy to open the wrapper of an already opened pack! Their loss is my gain! I've learned you must be proactive at a card show to get the good deals! 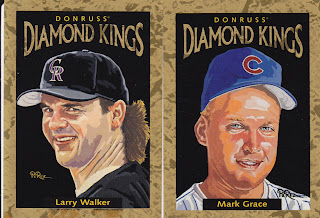 These last two hail from the 1996 Donruss set. Both of these cards are numbered out of 10,000. Ahhh, the 90's! Regardless, they were both decent players so they might be good trade bait!
That's it for the card show. I can't wait until the next one!
Posted by Ryan H at 10:22 PM