I'm just going to start this off saying that this was one of the best boxes I have ever busted! Stay with me till the end and you'll see why.

I used part of my tax refund from the Virginia State Government to treat myself to some wax. I used all of my Federal refund to pay off my credit card so I needed to do something nice for myself!


I have always been interested in the Goudey line that Upper Deck put out from 07 to 09 but the shortprints really turned me off. I HATE SHORTPRINTS. I decided to swear off the shortprints and just collect the base sets, cards 1 thru 200 for each year, and use the shortprints as trade bait.


I like the o7's because they are the same size as the original 1933 Goudey cards. I really like the feeling of the cardboard in these cards. It just feels old timey and UD did good job of capturing the charm of the original set. Though I am a little perplexed at why UD made a parallel set of Red Lettered Backs that are basically the same collation as the Green Lettered Backs.


Here's scans of the two BIG MOJOZ HITZZ promised on the outside of the box: 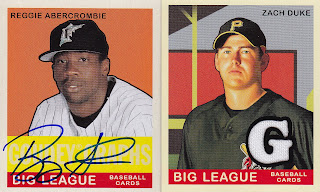 Uninspiring at best. I can't complain about on card autographs and not everybody gets a Ripken Autograph in their box. These are for trade.

Now, this is where the box gets good. There are two box loader packs that are promised on the sell sheets for this product. One (1) card pack that is inserted on top where you are promised a Sports Royalty card. I got Peyton Manning. Not bad. He's for trade if anybody is interested.
The second box loader pack is inserted in the bottom of the box underneath all of the regular packs. These packs are inserted 1 or 2 per 12 box case. I was very lucky and got one! The outside of the pack promises 1 buyback and one insert #'d to 15 or less. Here's the Goods: 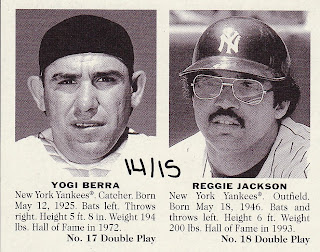 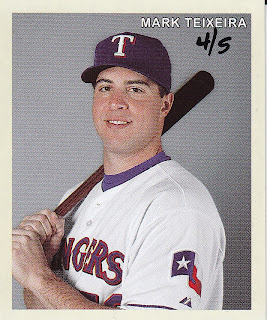 I got 2 inserts! BADASS!
The Yogi and Reggie insert is part of the Doubleheader insert set. I have no idea what kind of value it may have. The Teixeira is part of the Diamond Stars insert set. Both are hand-numbered and are great looking cards. I have no idea what to do with them at this point.
And now without further delay, the 1933 Goudey Buyback: 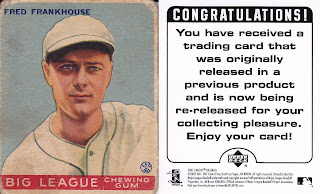 I've never heard of Fred Frankhouse but I could really give a crap! IT'S AN ORIGINAL 1933 GOUDEY Card. This becomes the oldest card I own by about 25 years. I nearly fell out of my desk chair when I saw this beauty! Sure the corners are rounded a bit but it doesn't have any creases and the color is fantastic. I LOVE THIS CARD!!! It's definitely not for trade and is going straight into my personal collection.
So there you have it. One of the best boxes I've ever opened. I hope you guys and gals out there share in my excitement about the Goudey Original I pulled!
I'm gonna work on the Green Lettered back set along with the Red Lettered Back set. I won a lot of about 300 of the Red and Green backs on eBay for nothing more than shipping costs so I should be pretty close on both sets. Look for a wantlist later this week.
Posted by Ryan H at 7:57 PM