This is the final box I purchased with a portion of my Virginia State Tax Refund. After my great success with my 2007 Goudey Hobby Box, and the disaster 2008 Goudey "Box Break", I had no idea what to expect with my 2009 Goudey Hobby box. I ended up being pretty satisfied with it overall.

Here's a list of the minis that I have for trade too:
Green Back: 100 Ethier, 102 Penny, 114 Hardy, 186 Kazmir
Blue Back: 65 Fowler, 120 Liriano, 208 Nolan Ryan
Here's the 4 in 1's that I got. I like the idea of these. Most of the foursomes make sense (young lefties, Asian players) while others make me scratch my head.
Red: 5 Jeter/Jackson/Berra/Ford, 29 Schmidt/Howard/Yount/Fielder, 38 Reyes/Rollins/Ramirez/Guzman, 53 Sizemore/Hafner/Martinez/Shoppach. 62 Wright/Zimmerman/Upton/Maine, 74 Matsuzaka/Wang/Fukudome/Ichiro, 77 Liriano/Kershaw/Price/Hamels, 89 Berkman/Lee/Tejada/Oswalt
Blue: 79 Beltran/Lee/Quentin/Guillen, 91 Zambrano, Johnson, Halladay, Hudson
Green: 52 Hamilton/Kinsler/Byrd/Young 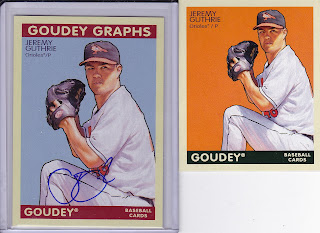 I was fortunate enough to get this Jeremy Guthrie Autograph card from one of the first packs from the box. This is the first time in my pack ripping career that I have pulled an Oriole auto from a pack. I've traded for O's auto's, gotten them in person, gotten them TTM and even have had other bloggers pull them in some of the Group Breaks that I've been in, but never pulled one myself. It took a minute for it to sink in and after the initial shock in the very next pack, I get a Green Back Mini of Guthrie. Wow!

The outside of the box boasts one Autograph and one Relic card per box (on Average!).... This box was not average. I ended up with 3 relic cards from the box: 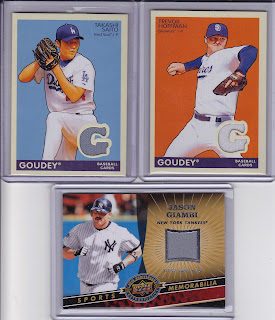 These relics are ones that only BA Benny could love (just kidding of course!). If you can look close enough, Saito is pictured as a Dodger but listed as a Red Sox player and Hoffman is pictured as a Padre but listed as a Brewer. And sticking with the tradition of me pulling Orioles AL East rivals GUs and Autos I get this UD 20th Anniversary Jason Giambi. For BA Benny's Sake, I think Giambi had already moved back to the A's and onto the Rockies by the time this card was produced! Alas, at least he was listed and pictured with the correct team! All 3 of these are for trade if anybody is interested.

Since I am pretty far away from having the complete set, (1 thru 200) I might buy another box or just try to complete it by trading with all of my great readers. I should have a want list up really soon so keep an eye on my wantlist (linked to the right, in my sidebar).
Posted by Ryan H at 4:05 PM