Trade with Ryan of The Great Orioles Autograph Project

This trade started out with a post that Ryan S. who runs the ambitious blog The Great Orioles Autograph Project. I enjoy his blog being a big O's fan but I think he appeals to everybody because most of his posts are very factual. Anyways in Ryan's post, he mentioned that he too was going to Orioles Fanfest and had some extra autographs that he was getting that day. He didn't need Brad Bergesen, so I hopped on the chance. I sent him this 2010 Topps Heritage card and Ryan sent it back with Brad's signature on it! 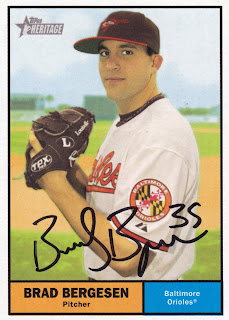 Brad has a legible signature and he actually put his jersey # on it! I was there the night Brad made his major league debut and so was Ryan. He has season tickets but I live 3 hours away from Baltimore. Small world I tell you!

When the package arrived at my house it was larger than the normal bubblemailer or card shoebox. I was anxious to open it up and what was inside was the Reimold bobblehead (pictured on the left of the trio). Ryan acknowledged my OCDness and completed my trio of O's outfielders! As I said before in my FanFest wrap up posts, I wasn't able to get a Reimold because of the shear # of people in line, plus I was getting autographs at the time they were giving them out. 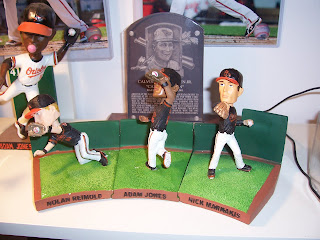 Also Ryan sent along a nice envelope of Orioles cards. While sifting through them I came across this card: 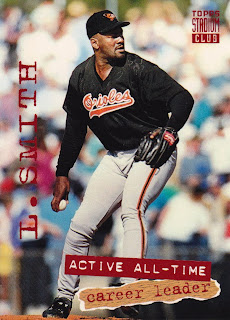 I wonder if this guy will ever make the Hall of Fame. When he retired he had the all-time saves record. It boggles my mind why he hasn't gotten more support from the voters. What do you think, does he deserve to be in or not?

Thanks Ryan for the great package. As a set collector, I really appreciate the Reimold bobblehead! Hopefully we can trade again sometime!
Posted by Ryan H at 5:51 PM