So I went to the Show at Chantilly this past weekend (Friday) with part of my federal tax refund money ready to spend. I went armed with my normal binder of Orioles and set wantlist, and my Cal Ripken and Nick Markakis havelists but I really had one main objective: buy Vintage Orioles. I was also very privileged to meet two fellow bloggers while at the show. Greg from Mojo and Beardy's fantastic card blog and Chuck from the HamRamMobtown blog drove down from the Baltimore area to spend some of their hard earned dough on some of the great cards that were to be had. I really think that Collector's Showcase of America does a great job at putting on this show every 4 months at the Dulles Expo center. They are even expanding their shows to Philadelphia and New Jersey this year. Well onto the loot of the day: 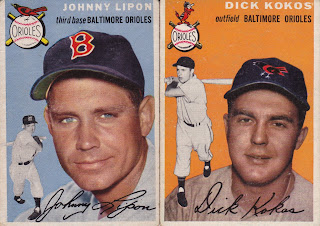 I love featuring 1954 Topps on my blog because it was the first year the Orioles were in Baltimore after their move from St. Louis. I am getting a lot closer to the team set. I was able to add these 2 cards for less than 5 bucks so hopefully tracking down the remaining cards won't take me too long or cost me too much coin! 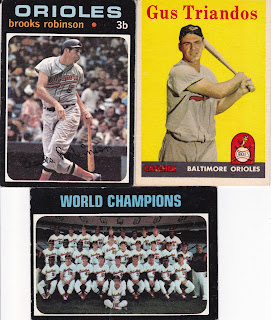 I did most of my shopping at one particular dealer's table that had a box of off-condition vintage hi series and star cards for very reasonable prices. I had been searching for the right 1971 Topps team card to add to my team set for a while and this one came to me at the reasonable price of 3 bucks. Sure its not Near Mint condition but this is one of the better ones I've seen for the price I paid. Its become my favorite Orioles Team card because 1971 Topps is awesome and 1970 was an awesome year for the Orioles (obviously because the card says World Champions!) The Brooks and Gus cards were in the same box at bargain basement prices of 4 and 3 dollars, respectively. These are the just some of the wonderful vintage Orioles I was able to get from this one vendor. I walked away with a stack of about 40 pre 1973 vintage cards (mostly hi-numbers) to knock of my list for about 100 dollars. Not too shabby! 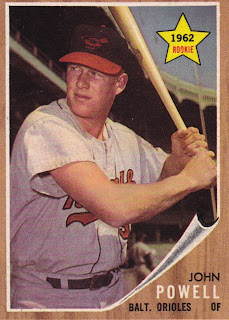 This Boog Powell Rookie card was sitting in the aforementioned dealers case. Its been pretty high on my wantlist and now its mine, mine, mine! I've been trying to track down this card at the right price so when I saw the price tag, I had to jump on it!

I didn't spend all of my money on vintage at the show however. Right inside the front doors was a vendor that had tons of game used and autographs at blowout prices. I remember this particular guy from the last show I went to at Chantilly. He admittedly has "bad math skills" and really doles out the good deals to all his customers. He has great people skills and engaged all his customers in conversation. I was wearing my cartoon bird O's hat so he obviously knew what I was digging for. He pointed to his "Tower of Value" where I found the Brooks and Frank jersey and bat cards. Beardy found the Crown Jewel of my Chantilly experience in the Autograph/Jersey card of Brooks. My eyes lit up and I had to have it! It's numbered 6/15 and only 25 bucks. Also not pictured with this trifecta of HOF cards are 2 autographed cards of Orioles Top Prospect Matt Hobgood that I also added to my stack as "throw ins". So, How much did this purchase cost me? 50 bucks? nope! 40 bones? no again! 35 dollars is what I paid for the 5 cards! I told you this guy did some crazy math! 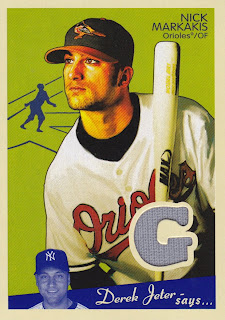 I was able to pick up this Nick Markakis cards I needed along with this relic card for 3 bucks. I know these Goudey relics are a dime a dozen but I just like this card! I'm not too fond of Jeter being on the front of the card but for the price, I'll deal with his grin.

I think the best part of my Chantilly experience this time was spending some time with beardy and Chuck. It was really nice being able to walk around the show looking at random boxes and showcases of cards with guys that share the same interests.
Beardy and Chuck actually bought a hobby box of 2010 Bowman Draft Picks to split so after the show, we headed over to the Hooters for some wings and burgers. Before we got knee deep in wing sauce, I volunteered to split the box up between them. I took all of the packs out of the box and dealt them out Vegas style (except for the dealing from the bottom of the deck! haha). I actually feel bad for Chuck because I didn't deal him a single dang refractor or the promised hit from the box. He did get a Chrome Heyward Rookie card but that still doesn't make me feel any better about my shuffling skills. Sorry Chuck!
I can't wait until the next show!
Posted by Ryan H at 7:05 PM