Trade with Erik of Manupatches and Chrome Scratches

I recieved this really nice patch card from Erik of the new Manupatches and Chrome Scratches blog. I sent him a 2011 Justin Upton Manufactured hat relic patch and a good little lot of Rockies and Royals. He saw the Upton on my first ever trade bait post that I put up a few weeks ago. That post led to three trades for me so I'm going to call that a resounding success! Look for another Trade Bait post soon!
This is my first ever real "patch" that I have ever acquired into my collection. I've got several different grey and white swatches of Orioles players but no patches until now. Take a look:
Javy Lopez 2005 Donruss Prime pathes #d 32/56 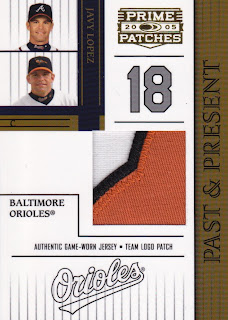 It looks like to me that this patch comes from the first "O" where it does the loop through the top to the "r". I might be looking at it upside down or backwards, though! Unless somebody else has an idea, I'm gonna go with my theory.

Thanks Erik for the trade!
Posted by Ryan H at 5:53 PM