I sent these 2 TTMs out later in the season and got them back after I got back from the honeymoon.  I guess these guys opened all of their fan mail after they had gone home for the winter. 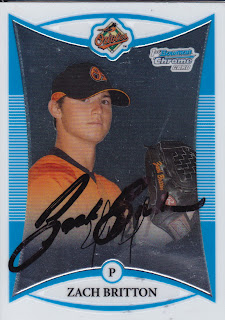 Unfortunately for me I tried a new way to send out TTM's and it didn't turn out as well as I had hoped. You can't really tell from the scan but the autograph smudged in the middle of his last name.  You can see it rubbed off in the envelope and reapplied to the card on the white portion near the bottom.  This is what I get for sending Chrome cards through the mail expecting that every player has a Staedler pen to autograph cards.  Lesson learned.  Nonetheless, I am very pleased to get Zach's autograph for my collection 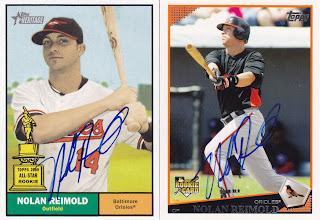 I had the opportunity to get Nolan's autograph at Fanfest last winter and decided to get him on an 8x10.  I ultimately wanted to get a regular card signed sooner or later at the ballpark or TTM.  I wasn't able to get him while I was in Atlanta because he either rode the team bus or snuck in through the Braves team entrance with Nick the Stick.  I thought I would try my luck through the mail and perseverance pays.  Both of these cards look great signed.  If I had to pick a favorite of the 2 it would have to be the Topps Heritage because of the All-Star rookie logo.

In case Nolan or Zach reads this, Thanks for signing my cards and sending them back to me!
Posted by Ryan H at 9:32 AM