Trade with Oscar of All Trade Bait, All the Time

Oscar of All Trade Bait, All the Time contacted me before my sabbatical from blogging and said he had some Orioles card up on his blog that I might be interested in.  I found more than what is pictured here but I'm just going to hit the highlights: 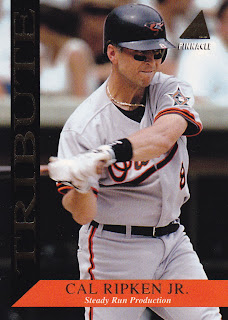 This Tribute card comes from 1994 Pinnacle.  I like the classic mid swing a pitch "pose" on this card.  You can really see the concentration and might in Cal's eyes.  Notice on the bottom of the card where it says Steady Run Production.  I've heard rumblings that Cal wasn't as great as everybody though he was.  Well he wouldn't have played all those games in a row if he wasn't a good run producer! 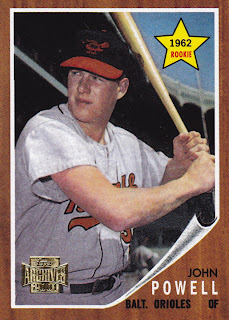 I believe this card is from 2001's Topps Archives set.  I initially missed out on the set but I'm proud to have this reprint of Boog Powell's rookie card from 1962 Topps now. 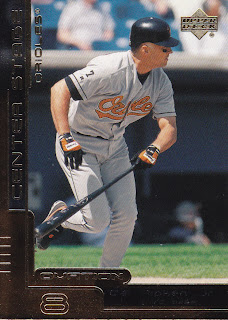 Here's another great card of Cal that I can add to my binders.  For what it's worth, it looks like the picture was taken in Comiskey Park.  I think the concrete dugout top gives it away.  I think the Pinnacle  Tribute card above is also from Comiskey.

Thanks Oscar for the trade!
Posted by Ryan H at 8:10 PM