I haven't run a Group Break since last fall and I think its darn well time for me to get one going.  I've decided to do a product that was a lot of fun last year.  With the mini craze that Allen & Ginter started several years ago, Topps decided to do a mini parallel of the flagship set. 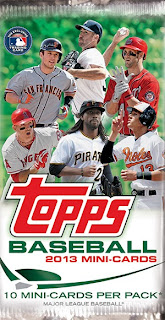 I'm going to order 3 boxes of the 2013 Topps Mini offering as soon as they are available on Topps.com.  These boxes are not going to be available in hobby shops or at retail as far as I know.  Not like this is going to be the only chance to get cards of your favorite team, but this one will be the most fun.  The release date is tentatively scheduled for next week so claim your teams before someone else does!

Here's a preview that Beckett did right HERE.

The rules are going to be similar to the other breaks I've run in the past.  You sign up for the team you want (if you want more than one, that's fine too).  You're then going to get a random team from the 15 that weren't picked.  I'm not asking for payment for your slots yet.  I did some math and the slots should come out to about $12 after shipping and all discounts are taken.  International shipping will be extra.  I'll ship the cards and then ask for the remainder of the shipping cost after I get them out to breakers in other countries.

For everybody involved, I will ask for payment as soon as I know how much the total price of the boxes and delivery cost is as well as my carefully calculated and fair packaging and shipping costs to get the cards in your hands.  SEND NO MONEY NOW.

***UPDATE ***All 15 slots have been claimed!  Thanks so much to everyone.  I'm just waiting on Topps to open up the sale of the boxes.  As soon as they come available, I'll buy them and let you guys know what the cost is going to be fore everyone. I hope to do the randomization of the remaining teams in the next few days and open up the trading of those spots.***